All about the Windsor chair

The Windsor chair is known and loved far and wide, from its namesake town in England to the United States. This iconic chair represents all there is to love about antique furniture - from its rich history down to the simple, sturdy joinery that has allowed so many to survive.

Windsor has not strayed far from our thoughts over the last month. The market town is on the River Thames just West of London and home to Windsor Castle, a royal residence and the final resting place of Her Majesty Queen Elizabeth II.

It’s generally accepted that the first Windsor chairs were made in the Thames Valley in the 1720s, and High Wycombe was actually the main producer. Windsor was the all-important trading ground for transferring the chairs to London, so it soon adopted the name Windsor chair.

While we usually picture a Windsor at the dining table or in front of the fire, it actually started life as an outdoor chair. The 18th Century brought immense change for the English landscape garden, marking a departure from the formal style of the 17th Century. The garden was suddenly more relaxed and leisure-orientated, a place to take tea or play a lawn game.

This prompted a need for garden furniture that was sturdy but light enough to move around, and from there came the Windsor chair. Originally, these chairs sported a coat of green paint to blend in with their outdoor setting. As the style grew popular, a distinction arose between painted chairs for outdoor use and stained versions for indoor use - with the latter more familiar to us today. 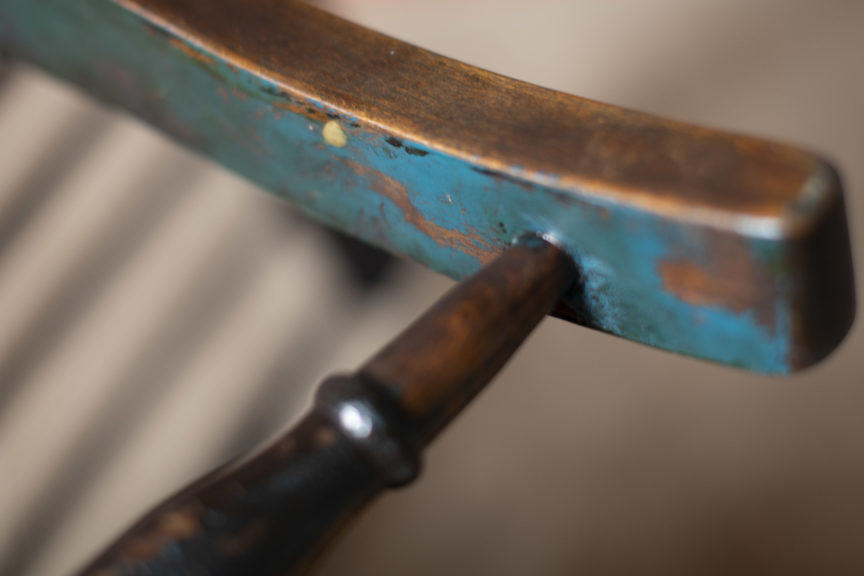 The Windsor chair is as much defined by its construction as it is by its aesthetic. They were sometimes called ‘wedge’ chairs because of the wedge joinery that secured the legs and uprights into the seats.

Put simply, a wedge-tenon is a mortise-and-tenon joint without the glue. Instead of glue, small pieces of timber cut at an angle - the ‘wedges’ - secure the two parts together. It is a friction joint that relies on minimising any possible movement between the different parts. The survival of so many original Windsor chairs today testifies to the strength of this simple joinery.

Local workshops made use of the native woods that were abundantly available to them to make these common chairs. For instance, beech was plentiful in the hills surrounding High Wycombe, so this material usually formed some part of the chair. As steam-bending increased the popularity of curved backrests, yew and ash were chosen for their pliable nature.

Furniture makers often favoured elm to form the seat. They couldn’t rely on adhesives to join seats, so they had to use one solid piece of timber. Elm, a sturdy hardwood, fit the bill because of its firm yet malleable nature; the latter important for creating the saddle seat design. 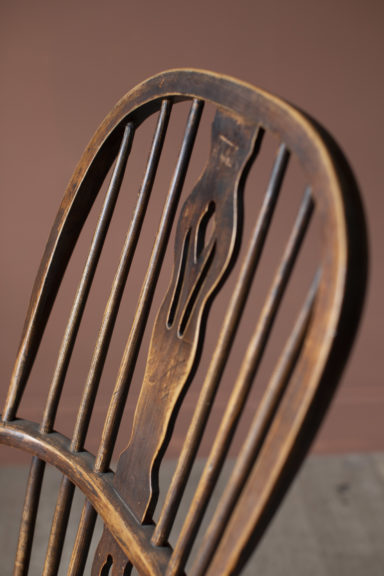 The Windsor style inevitably spread far beyond the west of London. It migrated northwards, with prolific workshops in Nottingham and Yorkshire amongst other counties. Part of the charm of regional furniture is the variations that arise from local influences, with a gentle competitive spirit driving a need to stand out.

The backrest offered a canvas for creativity. Firstly, different regions and workshops had different preferences when it came to the overall shape of the backrest. As a result, you find hoop-backs, comb-backs, bow-backs, high and low backs, and everything in between.

The central back splat presented the opportunity to stand out and show off expert furniture-making techniques. Fretwork could be simple or elaborate, depending on the maker, and splats depicting a carved wheel were particularly popular throughout the Windsor's heyday.

This humble chair would sometimes reflect national developments, too, as was the case with the Prince of Wales feathers.

You will occasionally come across Windsor chairs where the central splat bears these feathers - the heraldic badge of the Prince of Wales - in fretwork. While a long-standing emblem of the heir to the throne, it had particular resonance in the late 18th Century.

The Prince of Wales became Prince Regent in 1787 due to the declining health of his father, King George III. As the youth entered the national spotlight, furniture offered ordinary people the chance to recognise the monarchy in their own homes. 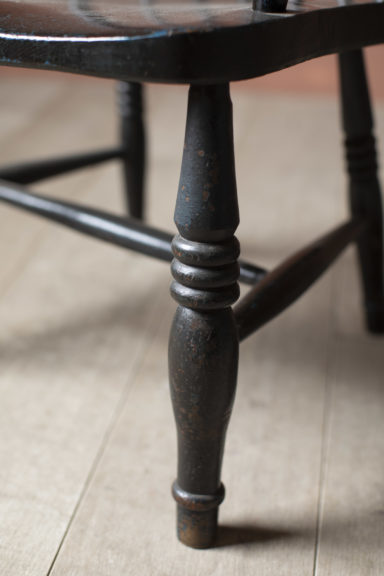 Look at the legs

Moving into the 19th Century, furniture-makers favoured turned legs accompanied by turned stretchers. ‘Bodgers' were responsible for turning the timber to produce legs, stretchers and spindles for Windsor chairs. So valuable was their craft, bodgers had their own concentration of workshops in the Chiltern hills.

While production slowed after the 19th Century, the Windsor chair has lived on in countless guises ever since.

Ercol put their distinctive stamp on the style in the Mid-20th Century, launching their own Windsor chair made with wedge-tenon joinery. Mid Century versions tend to be sleeker and more refined, yet the basic concepts of a saddle seat and decorative open back remain in almost all of them.

Modern manufacturers continue to emulate and draw upon this rich design history, demonstrating the timeless appeal of simple, well-made furniture. We’re not sure you can beat an original though…

A Windsor for every occasion

There are Windsor chairs to suit every room of the home and serve every purpose. You might choose stately examples with armrests and proud legs for a fireside chair, and simple hoop-backed chairs for dining. There are children's Windsors, captain's Windsors, and rocking Windsors.

When it comes to sets, don’t be afraid to mix and match Windsors for a more eclectic look. They will share a simple vernacular aesthetic and the strength of solid wood - the quirky variations are very much part of their charm.