For the Love of Ply

For “Antiques Roadshow” expert Chris Yeo the latest exhibition at the Victoria and Albert Museum was just the starting point for a surprising journey following in the footsteps of one of the twentieth century’s outstanding designers – and a Soviet spy ring - to one of London’s most revolutionary and glamorous buildings.  Who would have thought plywood could be so interesting?

When you think of plywood (as we all do from to time) what is it that comes to mind?  If tea chests and cheap D-I-Y are all you can think of then the curators at the Victoria and Albert Museum are keen for you to pay a visit. As the museum’s latest exhibition Plywood: Material of the Modern World is quick to point out, despite its humdrum image, plywood used to be seen as a “wonder” material, favoured by engineers and avant garde designers at the cutting edge of technical and artistic innovation. The exhibition features a bewilderingly diverse array of objects - from bi- planes to skateboards -alongside design classics a-plenty by the giants of 20th century design, including Alvar Aalto and Charles and Ray Eames, to tell the story of how plywood made the twentieth century.

Plywood - the technique of layering cross-grained veneers to make a material stronger than solid wood - has been around for a long time; the ancient Egyptians were using it in around 2600BC. But it was only in the early twentieth century that designers began to exploit and celebrate its ability to be shaped into strong, curved forms, when plywood started to be seen as chic. Amongst the exhibits on show one piece stood head and shoulders above the rest; something so jaw droppingly beautiful that it stopped me in my tracks. A symphony of sensuous curves,  the item in question could easily be mistaken for a piece of Modernist sculpture by Henry Moore, but was, in fact, a lounge chair. It was designed in 1936 by Hungarian émigré and Bauhaus golden boy Marcel Breuer and was manufactured by a British company called Isokon. This chance encounter was enough to make me hunger for more. I’ve always believed that every great piece of design has a bigger story to tell and, in this case, that certainly proved to be true. By the end of the day I had traversed London with all the assiduousness of one of Agatha Christie’s detectives. You’ll be hearing more of her later. In the meantime, let me tell you of the story of the incredible house that plywood built.

Let’s start with Isokon. The design studio was founded in 1929 by young husband and wife team Jack and Molly Pritchard. They were idealists and visionaries who passionately believed in the power of good design to change society for the better.  Both had travelled widely in Europe where they were impressed by the new ‘international style’ of modernist design that was emerging there. The Pritchards probably qualify as the unsung heroes of 20th century design in England, mainly known today for the furniture they produced – design classics like the Long Chair and the’ Penguin Donkey’ (not, as it sounds, a nightmarish hybrid from the island of Doctor Moreau but a storage system for paperbacks) – all constructed from plywood.  For most of the 1920s Jack Pritchard had been Sales Manager of Estonian company Venesta, at that point the largest manufacturer of plywood in the world and as a result ply was used almost exclusively by Isokon in the furniture it produced. Pritchard’s contacts within the European design scene meant that by the mid-1930s, as well as Marcel Breuer, Isokon’s payroll included celebrated ex-Bauhaus designers like Walter Gropius and Egon Riss and Isokon furniture was a must have amongst the capital’s in-crowd. But Jack and Molly had plans that went beyond furniture; their magnum opus was to construct a building the like of which England had never seen before; a vast Modernist block of apartments which would not only look revolutionary but which would also offer a radically new way of living. The Isokon building - also known as the Lawn Road Flats - was to be a bold experiment that would introduce the concept of communal living to the middle classes. They decided to bring the revolution right to the heart of respectable middle class Britain and a plot in the leafy north London suburb of Hampstead was bought.

What the Pritchards needed was someone who could make their dreams concrete. In 1932 they found that person in the shape of a young Canadian architect, Gordon Wells-Coates. Wells-Coates turned heads wherever he went. He was good looking, dynamic, slightly eccentric and, according to Jack Pritchard,  “cooked Eastern cuisine and was known to sit comfortably in the lotus position for hours”. Born in Canada to Methodist missionary parents, Wells-Coates spent his childhood in Japan and, as a young man during the First World War, had joined the Royal Flying Corps (where he had flown a Sopwith Camel – a plane largely made from – as if you didn’t know – plywood). After being demobbed, he studied at Whitehall’s Department of Scientific and Industrial Research. But ever the free spirit, instead of taking a job in industrial design, Coates became a writer for the Daily Express and became part of the 1920s Bloomsbury set; a Martini swilling fixture in the fashionable haunts of Soho and Fitzrovia.  Alongside his appealing personal traits, the young architect shared the Pritchards’ vision of a modern world shaped by good design. It was a meeting of minds and the air between them positively crackled.

Wells-Coates had very little experience of designing buildings, certainly nothing on the scale of  the Isokon building. But what he lacked in practical experience he made up for in charisma and the Pritchards were sold. Their confidence was not misplaced. A trip up the Northern Line showed me that Wells-Coates lived up to his promise and delivered with a super engineered, sleek, jaw dropping, timeless slice of beauty. Sitting among the Georgian terraces of leafy Hampstead the Isokon building was truly revolutionary when it first opened its doors in 1934. Built of reinforced concrete – the first time in Britain this had been used on a domestic building - with cement wash render (white with a hint of pink), the main elevation facing Lawn Road features a cantilevered stairwell  giving access to cantilevered balconies that are carried the full length of the building. Today the streamlined apartment building still feels fresh with its crisp, sculpted outline and floating balconies suggesting a great ocean liner moored among the trees.  Not surprisingly, plywood featured strongly, from plywood wardrobes  and fitted kitchens to the penthouse flat – originally occupied by Jack Pritchard and his wife Molly -  its walls and floors clad in Finnish birch ply.

Jack Pritchard labelled his brainchild ‘an experiment in new ways of urban living’; a bold claim but one which rang true. The flats were intended for young professionals: people who could not afford to buy homes and would otherwise be living in digs presided over by hatchet-faced landladies in curlers, prone to imposing curfews at nine and breakfast at eight. Residents were originally expected to dine and socialise in the communal restaurant –the Isobar - on the ground floor, rather than privately in their flats. It was the UK's first attempt at communal living. In 1930s Britain this really was revolutionary.

The Isokon building offered a raffish escape from grim inter-war reality: nude sunbathing on the roof terrace soon became de rigueur. While the flats were originally intended for the not so well-off, they quickly became the epicentre of North London's avant-garde scene during the 1930s and 1940s, populated by a fashionable elite of artists, writers and other free thinkers.  Laurence Olivier and Vivienne Leigh could frequently be seen in the Isobar sipping cocktails and talking philosophy with Betrand Russell.  Famous residents at this time included the sculptors Henry Moore and Barbara Hepworth; ex Bauhaus Head Walter Gropius lived there as did Marcel Breuer but perhaps its most famous resident was Agatha Christie, who wrote her only spy novel N or M?while she was living in the flats. Christie often said that she invented her characters from what she observed going on around her and at the Isokon building she would have found plenty of material.           Communal living attracted communist sympathisers.  Alongside its intellectuals and artists, the Isokon building became a haunt of some of the most prominent Soviet agents working against Britain in the 1930s and 40s, among them Arnold Deutsch, the controller of a notorious group of Cambridge spies and Melita Norwood, the longest-serving Soviet spy in British espionage history. 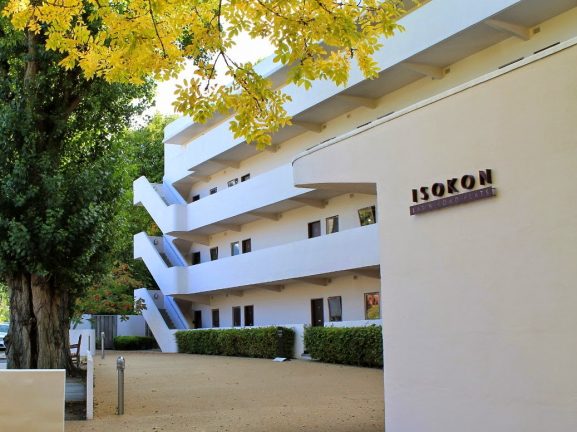 Glamour, notoriety and a whiff of revolutionary fervour, the Isokon building had it all. But from being a shining beacon of modernity the building’s fortunes slid and, by the end of the twentieth century it had fallen on hard times, a haunt of drug dealers and drop outs. Fortunately  a few souls with all the visionary insight of Wells-Coates and the Prtichards saw beyond the graffiti. After an extensive restoration in the early noughties, the Grade 1 listed Isokon building is riding high once again: a tribute to its creators, it will always be the house that ply built.