For the love of stripes

From the sun-soaked parasols of the Amalfi coast to crumpled sweetshop bags on the English Riviera, stripes are everywhere. They always have been, in various forms, but their presence feels particularly loud right now.

Perhaps it's because we crave their unabashed joy in the midst of gloomy national and international developments, or because we’ve been busy whole-heartedly embracing summer after years of restriction. Whatever the reason, manifestations of this versatile pattern range from classic to retro. 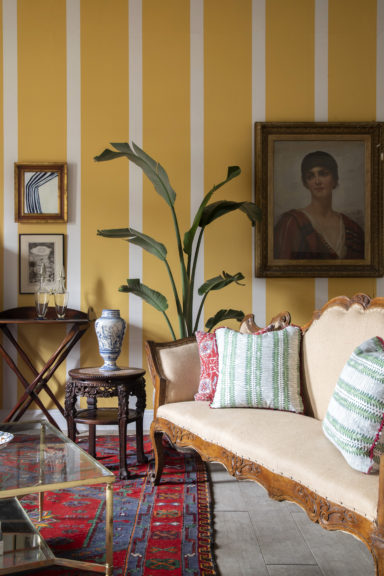 A chequered (striped) past

Stripes have not always stood for beauty and joy, though. During medieval Europe, they actually signified an outcast and those condemned to wear stripes included hangmen and court jesters. This was mostly down to a bible passage which dictated: “You will not wear upon yourself a garment that is made of two.” Christians interpreted this to mean clothing of two contrasting colours. Because of their simple and obvious nature, stripes drew attention and demonstrated 'otherness.' To this day, prisoners around the world wear stripy uniforms to hinder their chances of escaping unnoticed.

The turning point for the pattern came at the end of the 18th Century. Tastemakers were exhausted by the heavily ornate rococo and chinoiserie styles that had dominated up until then. With the enlightenment came a countermovement - neoclassicism - and with neoclassicism came a newfound love for stripes. Stripes now stood for simple elegance and a sense of order that stemmed from classical architecture.

This was the era of the Regency stripe - a wide stripe in one colour flanked by two or more narrower ones in a contrasting shade. Still popular today, this classic stripe works anywhere from clothing to upholstery. Across the channel, French seamen wore woven shirts featuring 21 navy stripes - one for each of Napoleon’s victories. This classic nautical stripe would later inspire the iconic Breton shirt, and so begun fashion’s love affair with the pattern.

Fast forward to the 1920s and stripes were now appearing on all sorts of clothing; suits and ties, cricket and rowing blazers, and even candy-striped swimwear. Once the 20th Century had weathered two world wars, no advert for the seaside was complete without a swimsuit bearing the pattern.

It wasn't just fashion that started to harness the power of stripes, but hospitality too. Wide ‘awning stripes’ get their name from the shops and restaurants that sported them, becoming synonymous with a warm welcome. Throughout history, stripes have offered a joyous antidote. 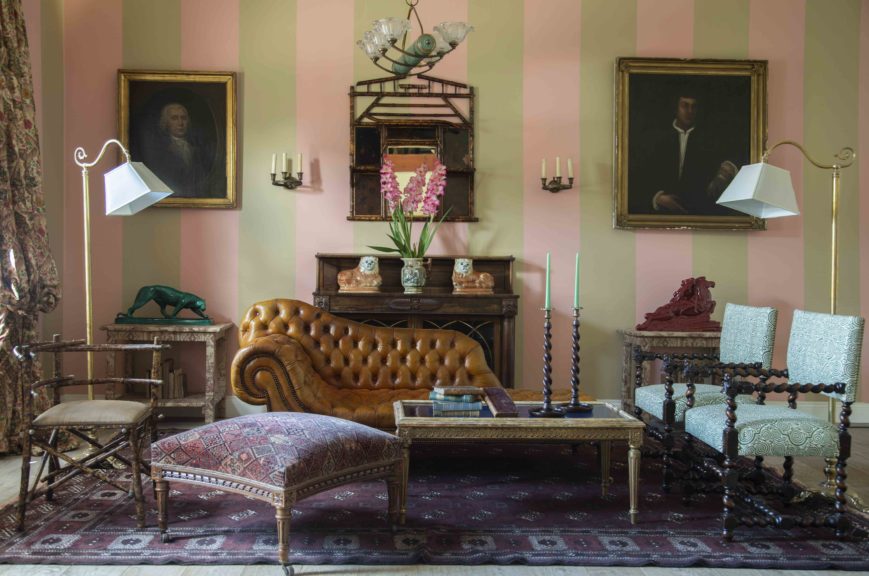 The stripe has been through many guises, and not all of them were purely driven by aesthetic. Ticking refers to the dense woven cloth that once covered mattresses, designed to protect you from harsh fillings like straw and horsehair. The cloth featured a uniform pattern of wide and narrow stripes, usually in a muted palette of black, blue or red.

Despite its humble origins, mattress ticking has had a monumental ripple effect in the design world. Fabric houses from Chelsea Textiles to Colefax & Fowler have released their own versions, while other traders specialise in original antique cloths.

Indeed, ticking stripes have become a distinctive marker of English country house style, where they decorate anything from sofas to valances. Ticking is a shining example of how stripes can feel refined, with a timeless appeal that weathers passing trends. 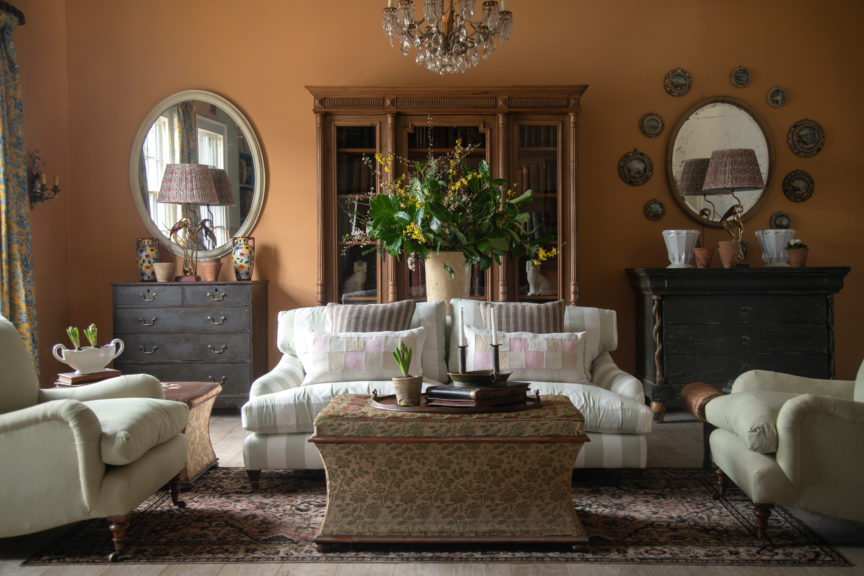 How to use stripes

Striped cloth dates back to the ancient Egyptians, making it one of the oldest patterns on record. The wildly different ways we've embraced them over the centuries goes to show just how versatile they are. This simple pattern is the building block of plaids and checks, as well as geometric designs.

From seaside to fireside

When we think of stripes in interiors, fresh nautical schemes often spring to mind. Certainly, lots of striped fabric instantly brings a relaxed beach house feel to a garden room or shepherd’s hut. Outside, too, nothing evokes nostalgia quite like a stripy deckchair or parasol.

But stripes do have their place in more traditional environments as well. After all, they first came to the fore in opulent French drawing rooms and classic English country houses. Upholstery fabric is perhaps the most obvious use, and one that allows a lot of room for personal interpretation. A classic Howard & Sons sofa or armchair, for example, remains understated and elegant with a Regency stripe fabric, or gets a heady lift with a bright awning stripe.

Stripes don’t have to be the only pattern in a room, either. In fact, they layer beautifully with fluid, ornate patterns like toile de jouy. A simply striped sofa in front of a chinoiserie wallpaper, or a striped Swedish flatweave in amongst chintzy upholstery, is the sort of bold decorating that really pays off. Statement walls painted with lemon yellow stripes, or a more traditional striped wallpaper, can transform the feel of a room. 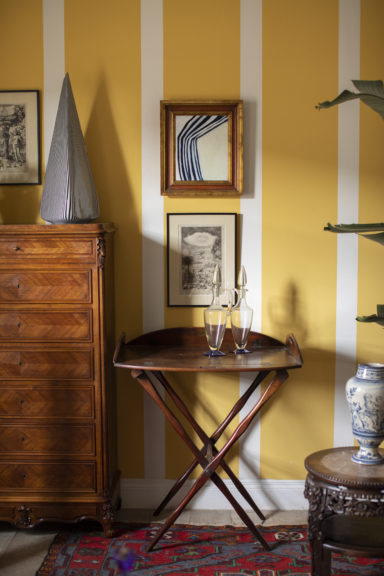 If you’re not quite ready to paint candy stripes across an entire wall, the pattern works just as well in small doses. Striped valances and headboards bring a light-hearted joyfulness to the bedroom setting without feeling overwhelming, for instance. Scatter cushions have the same effect, offering a good opportunity to blend different types of stripe in one setting.

Even if an interior appears to have no stripes at all, a closer look often reveals their powerful presence. For instance, a simple border around an otherwise plain rug draws the rest of the room in - conversing with other geometry in the room to create a considered feel. Lampshades in bright, contrasting stripes, or with subtler top and tail trims, can add a little or a lot of this chic pattern to a space.

When it comes to this ubiquitous pattern, no home or personal style is off-limits. With autumn well on its way, look to the humble stripe to keep the joy of balmy summer days alive.

Shop the look, visit our lookbook 'For the love of stripes'.