With this year’s Oscars ceremony almost underway, “Antiques Roadshow” expert Chris Yeo goes beyond the silver screen to tell the story of a style straight from the Golden Age of the Hollywood.

It’s that time of year again. As the Academy get its envelopes in order and Hollywood’s publicity machine goes into warp drive, you’ll hardly need reminding that 2018’s Oscars will be taking place in a couple of days. Are you breathless with anticipation? Me neither, let’s do lunch. That’s not to say I don’t enjoy a good film, quite the contrary, it’s just that, as with so much in my life, my tastes lean firmly towards the vintage. And when it comes to movies - and movie stars - the Dream Factory just doesn’t make them like it used to. Talking of which, did you see Feud? It was indisputablythet.v. drama highlight of 2017, an intimate and intricate examination of the relationship between the undisputed movie queens of Hollywood’s Golden Age: Joan Crawford and Bette Davis. The whole eight episodes was a perfectly crafted study into the rivalry between the two stars that had simmered for decades but which finally boiled over in 1962 during the making of Whatever Happened to Baby Jane?.  Amongst the stellar performances and electric dialogue, the scene stealer – cast aside - was Joan Crawford’s apartment; a symphony in royal blue and cream velvet, replete with Chinese Foo dogs and an artificial cherry tree. It was, quite simply, the very definition of Style, with a capital ‘S’. Of course, one would expect nothing less from a woman whose appetite for perfection knew no bounds and who once had on operation to have her back teeth removed – all the better to see your cheekbones, my dear

Joanie’s apartment – where we’ll return a little later – was an example of the design style known as Hollywood Regency. On the other side of the Pond it’s a term that requires little explanation. You’ll probably be familiar with the name, thanks to our friend the internet, we’ve started to encounter it in the U.K. in recent years, but just what is it? Well, let’s start with the name.  As monikers go, this one couldn’t be more apt: conjuring up the glamour and spectacle of tinsel town with the refinement and sophistication associated with Georgian England’s playboy in chief, the Prince Regent. Hollywood Regency was a style born of Hollywood for Hollywood. It was created for the homes of southern California’s elite and emerged in the 1930s, just at the point when Hollywood movies started to be seen as the epitome of all that was glamourous. It was a child of the movies, the offspring of set and costume design, which trickled out of the studios, into the imaginations of designers and magazine editors, and eventually into retail shops. The people who adopted it were the film stars, studio moguls and gossip columnists, tinsel town’s equivalent of royalty and aristocracy. Hollywood insiders know it when they see it but, for those outside the Hollywood culture, it can be difficult to recognise. What are its hallmarks? 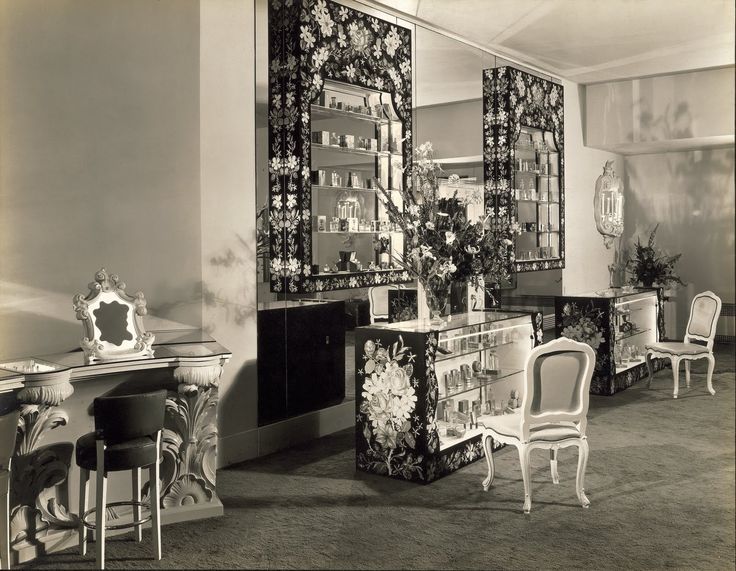 As a style, it exudes sophistication and confidence, with an undertone of swagger. Hollywood Regency samples from a smorgasbord of other styles; modernism is its base line but elements of chinoiserie, Moroccan, neoclassical, art deco provide the beat.Glamour was its soul; every detail was intended to convey a sense of luxury and refinement. It was all about finish, gilded, lacquered and mirrored surfaces sparkled and gave an air of opulence and exoticism, but this was no mere showman’s style. A sense of refinement and impeccable elegance was central to its popularity – people this wealthy and fabulous didn’t need to advertise their wealth when they could display something far more precious – their taste. Small wonder it became the signature style of celebrities at a time when their stardom depended on their personal image. Stars had to be seen to be having parties and be at parties and their homes had to be decorated in a way which matched and complemented (but never overshadowed) their megawatt personalities. Just how Hollywood Regency came to be the style du jour is a story that could only have happened in tinsel town.

In 1930 William Haines was MGM’s top male lead and one of Hollywood’s biggest stars. Handsome with dark hair and piercing baby blue eyes, he was every studio executives idea of what a leading man should look like. Hollywood was at William Haines’ feet. Five years later his film career was finished and he was told he’d ‘never work in this town again’. Haines was gay and his movie career was cut short because, unlike other gay movie stars of the time, he refused to hide his homosexuality – or his boyfriend – from the public. He steadfastly resisted Louis B. Mayer’s demands that he end his relationship and enter into a studio arranged “lavender” (sham) marriage. His film career ended in 1935 with Mayer ripping up Haine’s contract and throwing it in his face.  For most people, this would have spelled The End, but Haines was not most people. With that enviable and peculiarly American talent for starting-over, he reinvented himself as a decorator. He had a feeling for antiques and talent with interiors what he lacked, however, was a client base. Step forward Miss Joan Crawford – Haines’ best buddy from his MGM days. In the fickle world of Hollywood most people would have thought Haines too hot to handle, but not Joan. Not only did she stand by her old friend, she enlisted him to give her L.A. home a facelift, and helped launch his career as Hollywood’s number one decorator. In fact, Haines would achieve far greater success as a decorator than he ever had as a film star, whose not-so-little black book of clients included Gloria Swanson, Carole Lombard and Nancy and Ronald Reagan.

Billy Haines set out to find a lighter, more stylish alternative to the dark and gloomy Tudor and Spanish styles which had been in vogue during Hollywood’s early years. He achieved it by combining neo-classical elements, rebirthed from 19th century European designs, with rich textiles, sumptuously tufted seating and bold colourways, punctuating his schemes with unusual or eccentric artefacts to lead the eye around the room. This was the blueprint for Hollywood Regency. Haines was a true Modernist and loved clean lines, along with what he called ‘negative space’. He would leave objects floating in the middle of rooms, and favoured small-scale low-slung seating, understanding that the client would look grander – larger than life, in fact - if they were not overshadowed by their furniture. Haines never lost his taste for the dramatic; as well as bold colours, his clients were treated to oversized sculptures, satin covered fainting couches and strategic dashes of Brighton Pavilion style chinoiserie, like the Foo dogs, so loved by Joan Crawford. It was Joanie who called Billie Haines and his partner Jimmy Shields “the happiest married couple in Hollywood” they were together from 1926 to 1973 when William died. Jimmie took an overdose of sleeping pills shortly after, saying he found it impossible to go it alone. Over thirty years William decorated all of Joan Crawford’s homes and, yes, she did really have a cherry tree in her sitting room 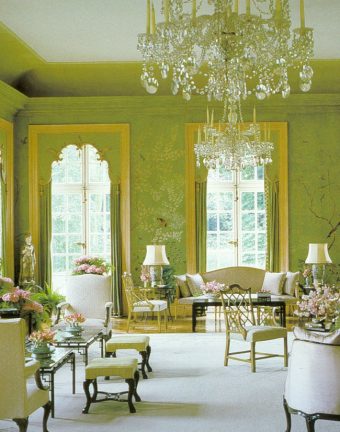 Dorothy Draper was another designer who had a hand in the development of Hollywood Regency; she was also the person who invented the term. Born to a wealthy family, Draper was the first to professionalise the interior design industry by establishing Dorothy Draper & Company in 1923. She revolutionised the concept of design by breaking away from historical room styles and embracing a look that was consciously Modern.  Like William Haines, she was fond of the grand, theatrical statement – often referred to as “the Draper touch”. While Haines worked on a small scale, Dorothy Draper became well known for her over scaled and brightly coloured versions of classic traditional rooms which she christened “Modern Baroque”. It has been said that Dorothy Draper was to interiors what Coco Chanel was to fashion. She was confident, cultured and able to challenge traditional ideas of good taste in a playful way. Draper took traditional decorative elements and gave them a twist, playing with contrast and scale; Floral chintz, stripes, and banana leaf prints were exaggerated to add a punchy, poppy vibe to wallpaper and upholstery. Panelled doors were given a proto mod-sensibility with contrasting squares in black and white. She loved to use vibrant, eye-popping colours in never-before-seen combinations, such as aubergine and pink with a splash of chartreuse, or, one of her favourite combinations – “dull” white and “shiny” black. Both Billy Haines and Dorothy Draper understood that interiors were as much of a stage as anything that could be found inside a Hollywood studio and that chic refinement and luxurious glamour could make a great double act. Hooray for Hollywood!