Some names are rightfully revered in our industry, and Eleanor Coade is certainly one of them. The legacy of Coade stone is a just reflection of the impressive lady at the helm of the business.

Eleanor Coade (1733-1821) was the daughter of a wool merchant. Born in Exeter, the family later moved to London in the mid-1760s and Eleanor set up shop selling linen. This experience nurtured her entrepreneurial spirit, and around 1769 she bought the premises of a struggling business that was making artificial stone. These premises, in Lambeth in London, laid the foundations for Eleanor to start making her own artificial stone.

We cannot underestimate the achievements of Mrs Eleanor Coade. Her factory operated successfully for 50 years and went from strength to strength, with Eleanor acting as direct manager from 1771. The Georgian period certainly didn't champion female business leaders, let alone in the manufacture of artificial stone. From 1799, for a period of fourteen years, Eleanor was in partnership with John Sealy. Pieces from this period are stamped 'Coade Sealy' rather than 'Coade Lambeth.' Otherwise, Eleanor oversaw every element of the business up until her death in 1821.

Eleanor Coade never married, but 'Mrs' was the courtesy title for single women in Georgian England. She spent much of her later life engaged in philanthropy and was particularly keen to help women in need. She left a few bequests to women in her will, which stipulate that the funds remain untouched by their husbands. 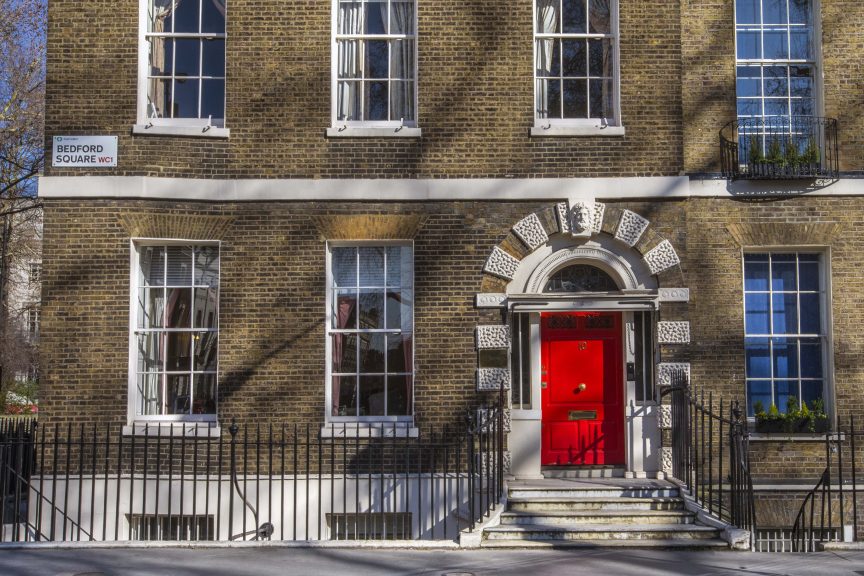 Coade stone ornamentation on the beautiful Georgian-style buildings on Bedford Square in London.

Coade did not invent artificial stone, but they were enormously successful in producing it. Eleanor's triumph came from her desire to make something that closely resembled the original in every respect. Nobody could fully decipher this recipe until the 1990s, when it was rediscovered and successfully reproduced. Coade stone was a ceramic that combined terracotta, clay, silicates, and glass. This mixture was fired for four days at a time in incredibly hot kilns. Eleanor's own name for her product was 'lythodipyra'- twice-fired stone.

The result was something malleable enough for detailed sculpture and ornamentation, but also incredibly tough. During firing the stone had a very low shrinkage rate and hardly any distortion occurred, so the results were very fine. It was also resilient against the harsh winters of Northern Europe, and dispelled the effects of frost and freezing weather. Because it was fired, it was possible to incorporate high levels of detail into the pieces. Unlike terracotta, which has a matte finish, Coade stone has a slight shine which makes it more damp-resistant. It also had the perfect colour for emulating stone, with the grey shades making it almost indistinguishable from limestone.

Fortunately for the company and clientele, the arrival of Coade stone coincided with changing tastes in architecture. In the second half of the 18th Century, the likes of Robert Adam were looking to add more and more detail to architectural ornaments. Coade answered his prayers, as this new artificial stone was much easier to manipulate than real stone. Indeed, amongst Coade's other reliable clients were Sir John Soane, James Wyatt, and Sir John Nash. 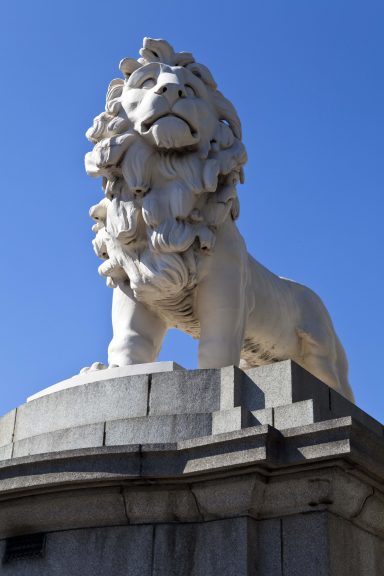 Lion statue made from Coade Stone, which is located on the Southern end of Westminster Bridge in London.

Leading up to her death, Eleanor handed over to a distant relation- William Croggan. The company continued to operate up until 1840 when they sold their moulds. Coade stone was enormously popular in the 18th and 19th Centuries and has endured well because of its winning formula. Later on, as Coade's secrets became public, manufacturers and individuals rushed to reproduce the stone. However, these attributes are also Coade's downfall when it comes to identification. Coade sculptures can look like anything from granite to marble, and this chameleon quality means many evade classification.

Nonetheless, some pieces are unmistakable. Coade's lasting bequests are visible at Stowe, Chiswick House, Anglesey Abbey, and many other great houses. Their offering was wide, thanks to the versatility of the material, and the Coade legacy is embodied in everything from statuary to garden furniture.

You will see several Coade sculptures at Chiswick House, including replicas of the Medici and Borghese vases. The large lion statue found near the Houses of Parliament on Westminster Bridge is a Coade creation. The lion's animated face is a testament to the malleability of Coade stone, and his survival of World War Two is a testament to its durability. William Woodington of Coade made three of these lions. One of the triplets has disappeared and the other, opulently gilded in 1991, now fittingly resides at Twickenham.

We increasingly recognise the true extent of Mrs Coade's achievements today. Her work revolutionised statuary and sculpture production, and the pristine results will hopefully pepper the British landscape for centuries to come.