Our showroom doors are closed but we are still open and fulfilling deliveries following government guidelines. Get in touch to find out how we can help.

The Arts & Crafts movement touched every corner of the design world. From furniture to textiles to jewellery, designers adopted a holistic approach to manufacture. At the very heart of every surviving piece is the craftsman himself.

Another cog in the machine

Vintage engraving from 1860 of a jacquard weaving machine.

By the end of the 19th Century, the industrial revolution had utterly transformed Western society. Industries boomed as new technologies emerged, and handicrafts dwindled. Vast factories emerged to accommodate these changes, and productivity and efficiency were the new watchwords.

The industrial revolution brought many elements of our lives today into fruition. In lots of ways, this was a momentous step forwards. Society underwent a dramatic change and standards of living improved for many. However, it was not so for those on the frontline of machine-led production.

The underbelly of factory work was tedious, gruesome, and dangerous. Unskilled labour was in high demand because the process required scores of workers to perform repetitive tasks. Certainly, the skilled craftsman conceiving, designing, and producing a piece became mere nostalgia. 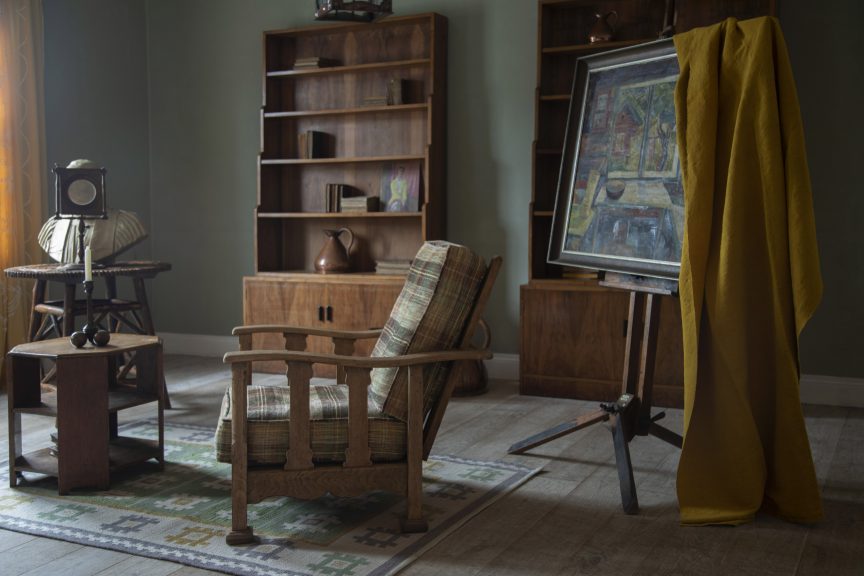 Fine art is that in which the hand, the head, and the heart of man go together.

For some thinkers, critics, and designers, these developments were unsettling. John Ruskin was a vocal art critic in the second half of the 19th Century. He claimed a link between poor design standards and poor social health in England. Ruskin suggested a return to handicraft: 'fine art is that in which the hand, the head, and the heart of man go together.' This idea that art serves a moral purpose would later become a fundamental principle of the Arts & Crafts movement.

Let's go back to 1851, the year of the highly anticipated Crystal Palace exhibition in London. This exhibition celebrated the finest corners of Victorian design and pieces from as far away as India. It was a majestic display of talent and wondrous furniture, but it also exposed the excesses of industrialisation. A nauseating range of revival styles was on display, and much of it was heavy-duty furniture that was rich with ornament. It was no coincidence, then, that the following years of the 1850s sowed the seeds for a different sort of revolution.

Excitement about machine-led production side-lined the decorative arts, and discontent mounted. The antidote to this artificial excess was a return to medievalism. The gothic was a popular Victorian revival style, and reformers hailed 16th Century methods. In his 1851 text, The Stones of Venice, John Ruskin praises gothic architecture and saw its roughness as evidence of the craftsman’s personality and freedom.

Pugin was another gothic advocate, and he believed in the importance of a piece's construction. He was in favour of exposing joints and other methods in the manner of a Medieval carpenter. This school of thought found its voice in the Pre-Raphaelite Brotherhood, formed in 1848.

Among the group's members were Dante Gabriel Rossetti, William Morris, and Ford Madox Brown. The Pre-Raphaelites opposed the High Renaissance, which they saw as frivolous and insincere. Instead, they sought moral seriousness and integrity, and this group was in many ways a precursor to the Arts & Crafts movement.

Madox Brown was one of the first to transfer the group’s shared ideals about design into furniture. He shared Pugin’s vision of flat surfaces and linear profiles that had more in common with Medieval carpentry than refined 18th Century cabinet-making. 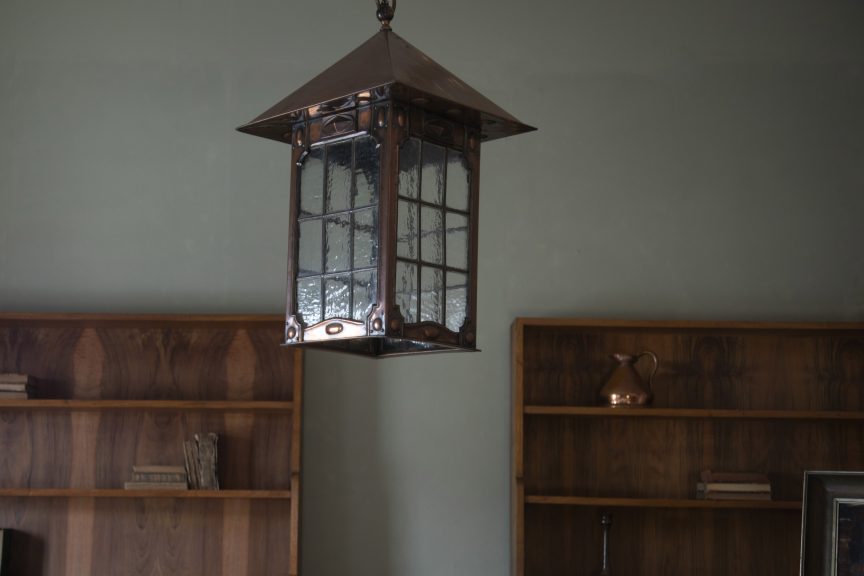 Arts & Crafts societies sprung up to centralise this growing group of individuals. The biggest of these, the Arts & Crafts Exhibition Society, was formed in 1888. This society held regular shows up to and beyond its 50th anniversary in 1938. They gave the decorative arts a stage and spread the beauty of Arts & Crafts. In 1960, the society merged with the Cambridgeshire Guild of Craftsmen to form the Society of Designer Craftsmen which is still active today.

There was a strong sense of community amongst these different organisations. 'The best tastes are to be found in those manufacturers and fabrics wherein handicraft is entirely or partially the means of producing the ornament.' These words of Richard Redgrave, a prominent reformer at the London School of Design, describe their shared sentiment. Significantly, many of the early members of this movement were architects. This meant that they held a shared interest in the gesamtkunstwerk- the 'total work of art.' For example, Charles Voysey was foremost an architect and then a major contributor to Arts & Crafts furniture and textiles.

Exhibitions put Arts & Crafts on display for all to see and escalated the movement. Journals such as The Studio helped to spread the word internationally. America's own movement was well underway, but with a slightly different approach. Unlike UK reformers, US practitioners were indifferent to the machine. They saw it merely as another tool at the craftsman’s disposal and necessary for commercial success. Under Gustav Stickley the American 'mission style' emerged. The mission style used sturdy oak and promoted democratic values, but Stickley was more than happy to use machinery to produce the furniture.

Have nothing in your houses that you do not know to be useful or believe to be beautiful.

Although he was already a prolific designer, William Morris only became fully involved with Arts & Crafts later on. Nonetheless, his influence was monumental and he played a central role at the beginning of the Arts & Crafts heyday in the 1880s. His focus was on a return to small-scale workshops, whereby the craftsmen involved could oversee the design process from beginning to end. The Medieval Guilds inspired Morris and offered a model for the personalised craftsmanship that he craved.

As an upper-class man himself, the impact of the factory system on the working classes shocked Morris. He drew on Ruskin’s teachings and shared his nostalgia for a pre-industrial world. Morris loved nature, and flora and fauna are front and centre of the 50+ wallpaper designs he produced over his career. The designer realised that to live in his perfect home, he would have to design every aspect of it himself. His famous Red House embodies his trademark quote: ‘Have nothing in your houses that you do not know to be useful or believe to be beautiful.’ 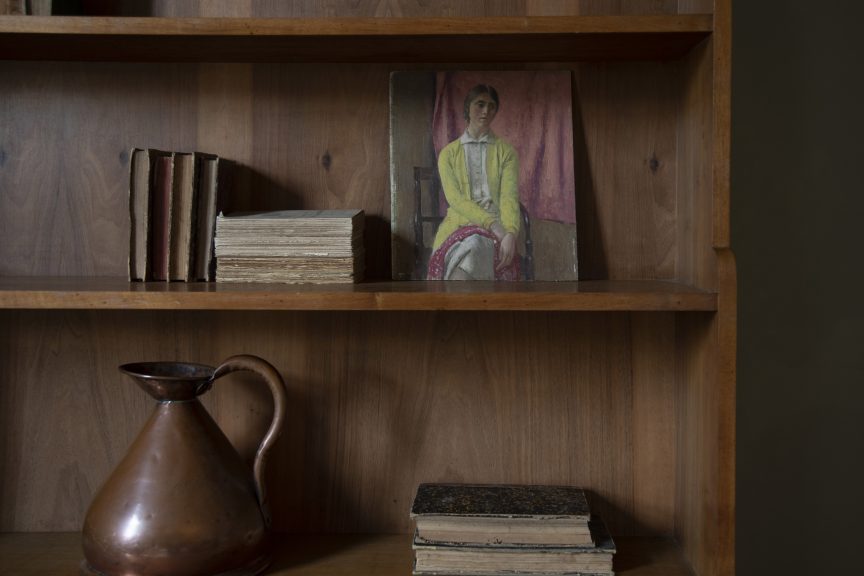 Designers wanted to create furniture that was useful to ordinary people and free from fussy decoration. Nonetheless, this movement was about reviving the decorative arts and aesthetics were still important. But crucially, designers did away with the ‘artificial’ ornamentation that had been front and centre of the Great Exhibition.

The Arts & Crafts umbrella was wide-ranging, but the majority of designs are united by a few simple features. Tables, chairs, and cupboards would have rectilinear shape and rely on simple vertical forms. The construction was a return to basics and most joints exhibit mortise-and-tenon or dovetail joinery. Arts & Crafts practitioners were unconcerned with hiding hinges or other aspects of a piece's mechanism. The movement proved that practical and aesthetic elements could happily coexist in design. 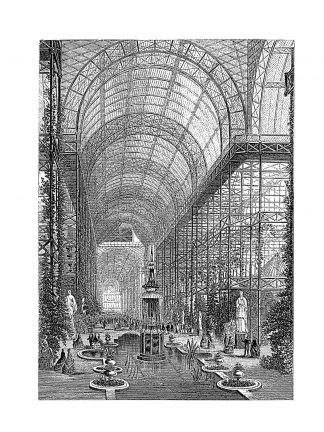 19th Century engraving showing the interior of the Crystal Palace in London, UK, which housed the Great Exhibition of 1851.

Craftsmen preferred darker woods, such as stained oak. They would use the wood itself as an aesthetic factor, with the grain, flecks, and rays often on display. It was not always solid wood, and some craftsmen took a more decorative approach than others. Some pieces might exhibit veneers and intricate carvings, but these elements never sacrifice the piece's utilitarian value.

The ‘through tenon’ provided another decorative touch, whereby the tenon extends through the mortised piece and projects out of the other side. Craftsmanship itself is visible in the end product of an Arts & Crafts piece, in a way that had formerly been lost to the machine. ‘Truth to materials’ was the mantra, and the results had a sense of integrity.

Upholstery would involve leather or simple cloth, in order to keep the overall look as plain as possible. Hand-sanding and pigment-staining gave pieces of furniture the best possible finish. Hand-rubbing exposed the different layers in the wood and began a piece's journey to having a wonderful patina. 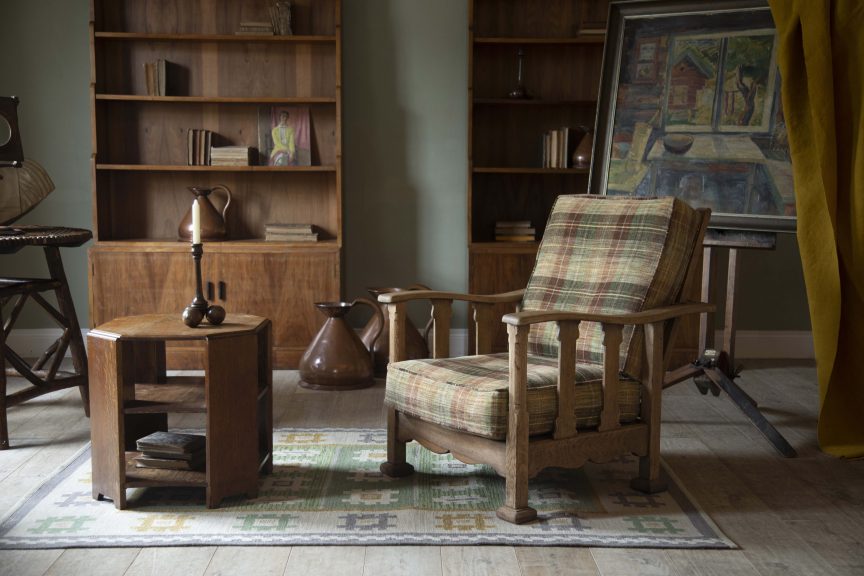 In the cities, Arts & Crafts gathered momentum through exhibitions and print promotions. Soon, the philosophy turned into commercial success. Designers forged good working relationships with manufacturers who could sell their wares. William Morris set up Morris & Co in 1875. The major Oxford Street store stocked other designers too, and they also sold through Liberty and Heals. Suddenly, the Arts & Crafts movement was reaching a much wider audience and it moved into the mainstream. It was the dominant design force in Britain up until the 1910s, and its influence spread across Europe, America, and Japan.

At the turn of the 20th Century, Arts & Crafts migrated out of the city and into the countryside. Lots of the designers celebrated simple rural ideals and the rolling hills naturally held great allure. Workshops sprung up across Britain, and many designers settled in the Cotswolds. These workshops became their own schools of sorts and each had its own take on design.

Sturdy structure, compelling patina, and timeless aesthetic appeal. These are just some of the qualities offered by Arts & Crafts designers. From cupboards to metalwork, every piece has the social history of this movement behind it. We are privileged to have the Arts & Crafts legacy around us in the Cotswolds. Our dealers are always sourcing Arts & Crafts gems so that we have wonderful pieces in stock. Our collection includes big names and makers, from iconic Heal's pieces to Gordon Russell's fantastic works. Visit our lookbook, 'Truth to Materials,' to explore a sample.