No point in British history had such a profound and lasting impact on furniture design as the Georgian period. Let's take a closer look at this towering legacy. 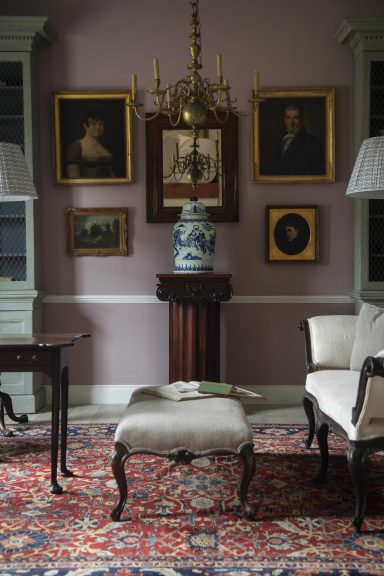 The Georgian period counts for over a century of English history. Four consecutive George’s were on the throne, and it was a time of relative stability.

Beginning with George I and ending with George IV, Georgian England encompassed a wide range of design styles. The enduring legacy, however, is one of sturdy and high-quality furniture that exudes elegance.

There’s a certain vitality to the Georgian period, reflected in its furniture and other antiques. Democracy was growing and it was a time of relative peace and prosperity. This was the era when games tables came to the fore, and interiors revolved around entertaining. Grand homes, such as Chiswick House, needed furnishings for entertaining guests for days at a time. Pieces had to be functional, but also on-trend, and cabinet-makers delivered to that brief.

The ‘early Georgian’ period refers to the reigns of George I and George II. Under George I, the elegant furniture of Queen Anne continued, whilst Rococo style flourished under George II.

The ‘late Georgian’ period correlates with George III, who reigned from 1760 to 1820. This was the heyday of Chippendale, Hepplewhite and Sheraton and neoclassicism took off. George IV, as Prince Regent, reigned on behalf of his father for the last nine years before taking over as King.

George IV pioneered the well-known Regency style. Our previous blog explored the Regency in-depth, so we will focus on the prior period in this article. 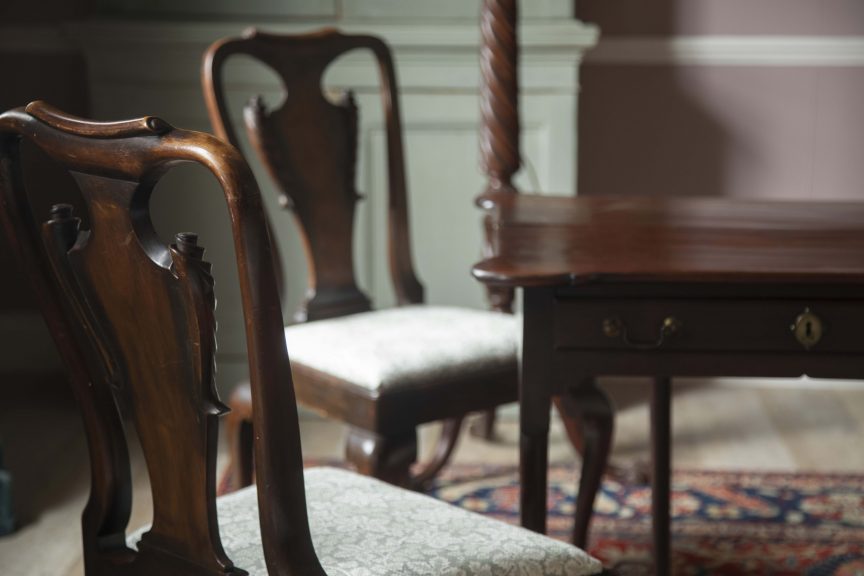 Georgian furniture did not just make use of mahogany as a material- the timber dictated design in this period. This exotic wood was not a new discovery; designers had long admired it and used it for the finest of pieces.

The timber of choice up until this point was walnut, but several factors side-lined it in favour of mahogany. England had been heavily reliant on France for importing walnut, until France banned its export in 1720. Shortly after, in 1721, Sir Robert Walpole as British Prime Minister lifted the tax on mahogany.

Thus, the mahogany revolution began, offering an indispensable resource to the cabinet-makers of the 18th Century. The timber was sourced mostly from Jamaica at first, and then Honduras.

This wood was durable and tough, with a very fine grain that resisted scratches and bumps. Mahogany blended seamlessly with ornament and lent itself well to the elegance that defined this period of furniture design.

Mahogany wasn't the only exotic timber coveted in this period; designers also exalted the boldly striped figuring of rosewood and satinwood. 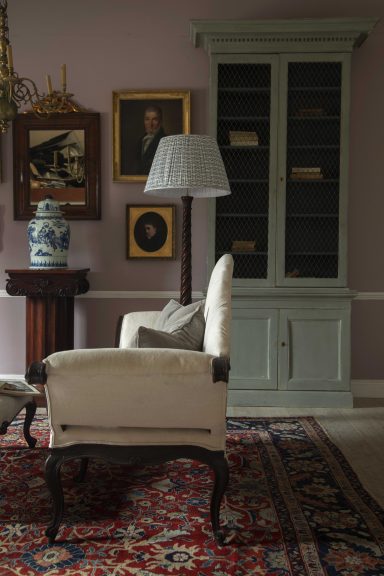 Both the excellence of furniture in this period as well as its varying styles are down to the master cabinet-makers of Georgian England.

The Georgian period saw a growth of the middle and lower upper class in England. This created a thirst for possessions and furniture, which provided a strong market for the cabinet-maker. And what an era for cabinet-making it was! 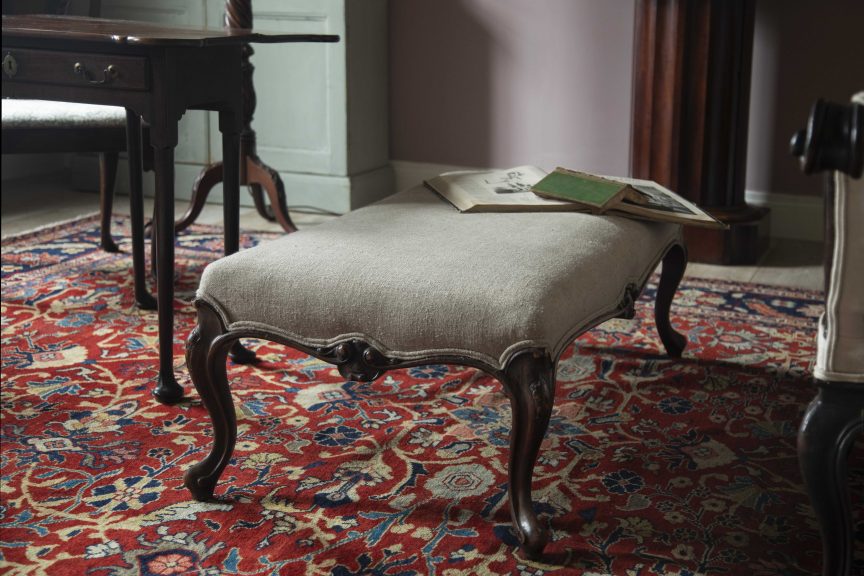 Thomas Chippendale was the first on the Georgian furniture scene in London, the centre of high society. Entrepreneurial by nature, he is widely regarded as one of the finest furniture designers in English history. In 1754, he found some fame with The Gentleman and Cabinet- Maker's Dictionary. With numerous reprints and editions, this pattern book was sourced by fellow cabinet-makers, architects and noble gentleman.

Chippendale was a man who found inspiration and wonder in everything he saw. He drew upon French Rococo style, more classic French style, the Gothic and the Chinese. The Chippendale legacy is aligned with English Rococo style, though he spanned so many styles with ease. William Kent was another designer who enthusiastically embraced Rococo as well as Palladianism.

Chippendale catered to swelling demand for functional yet stylish furniture. He accepted commissions to provide interiors totally in the Chippendale style for wealthy households. Chippendale pieces are famous; the camelback sofa, ribbonback chairs, and shell and acanthus decoration feature heavily. Collectors exalt his chairs, sofas, mirrors, and serving tables as some of the finest furniture in the world. He was known for bold brass hardware, fretwork moulding and cabriole legs with ball and claw feet.

‘Country Chippendale’ and ‘Irish Chippendale’ emerged in the second half of the 18th Century. Rural craftsmen emulated his designs, using native woods rather than mahogany. These are wonderful pieces in their own right, but the quality does not compare with his original designs. 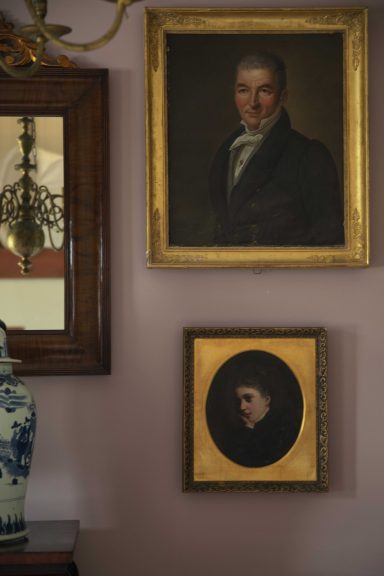 Where Chippendale pushed the boundaries, experimenting with new fashions, other designers brought furniture back to basics. Hepplewhite and Sheraton later joined Chippendale as key players in the furniture design of this period. The combined influence of these three men upon English furniture was nothing short of monumental.

As we move into the mid-late Georgian period, neoclassicism begins to dominate furniture design. These designers were of the 'Grand Tour' generation and drew inspiration from Greek antiquity. Robert Adams was undoubtedly the most significant proponent of English neoclassicism. Along with his brother James, the Adams' personal take on Palladian architecture and furniture sent shockwaves through design circles.

Chippendale became aware that change was underfoot, and so he took neoclassicism and ran with it. Some of his greatest successes were in this later period, and the neoclassical Harewood House is still home to some of his best furniture designs.

However, neoclassicism was Hepplewhite and Sheraton's guiding principle from the outset. Despite his huge legacy, George Hepplewhite the man is something of a mystery. He died in 1786, leaving his estate and business to his widow, Alice Hepplewhite. Alice carried on under her own name: A. Hepplewhite & Co. It was his widow who published The Cabinet-Maker and Upholster's Guide in 1788. This book would catapult Hepplewhite to the centre of furniture design.

Hepplewhite was the 'master of the sideboard,' and his designs were light, well-proportioned and beautifully polished. You might recognise them for their splayed feet and stunning inlay decorations. 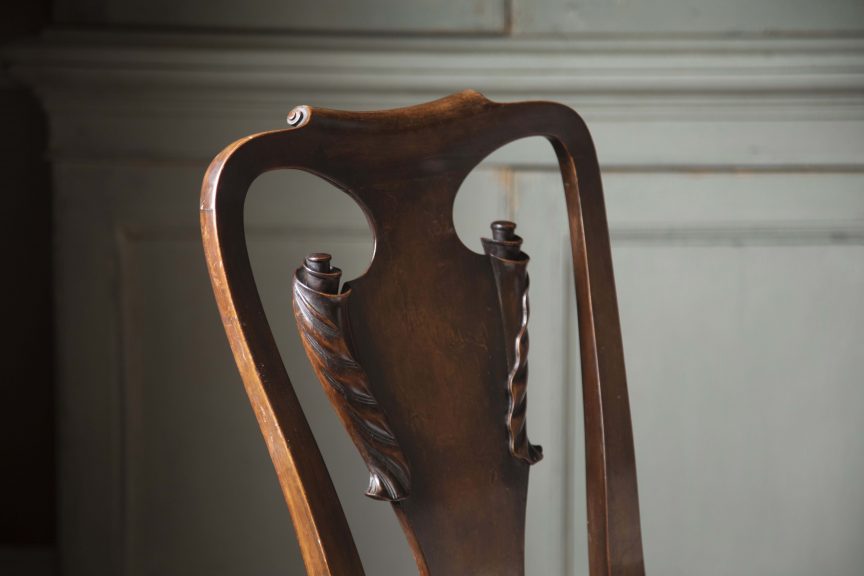 Chippendale and Hepplewhite had passed on before Thomas Sheraton arrived on the London furniture scene in 1790. He very much continued in Hepplewhite's vein, and the beholder can confuse the two men's pieces. However, Sheraton pieces went the extra mile when it came to refinement. Known for his rectilinear shapes and often opting for straight or tapering legs, Sheraton used neoclassical motifs such as reeding and rosettes.

And so, as the Georgian period came to an end, Hepplewhite and Sheraton finished up on a neoclassical note. Their ornament was in contrasting woods and beautiful inlaid decoration. Hence, in the evolution of the Georgian period, you witness a trajectory that builds up to extravagant heights before cooling down to simpler designs. 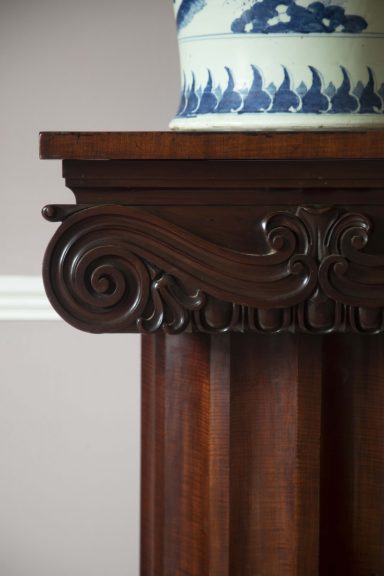 Despite the multitude of styles in this period, the majority had durability and beauty in common. For this reason, Georgian antiques have survived in high numbers and are still very desirable.

It was a widely emulated style for many years, particularly in the 19th Century. Although reproductions are still covetable in their own right, look out for the differences.

England and France revived Georgian design in the 20th Century, as the English Country House style emerged. Over in America, the Georgian legacy gave rise to Federal style. This is fashion that has truly stood the test of time and continues to influence interior design trends to this day.

Georgian tables, chairs, lighting, and cabinets adapt easily to the modern home. The pieces are unobtrusive and showcase the finest craftsmanship.

Lorfords is home to lovely Georgian pieces, which will ease seamlessly into your interior. Browse our lookbook ‘Georgian Golden Age' to breathe new life into your home.