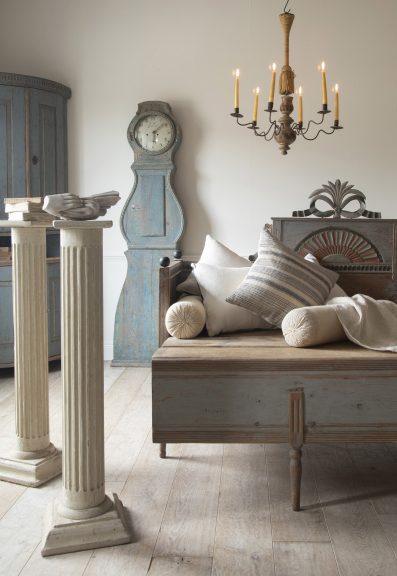 When discussing Gustavian design, the individual behind the name matters. King Gustav III reigned from 1772 to 1792 and oversaw and encouraged the flourishing of the arts.

The King was shot at a masquerade ball in 1792 and died a short while later. This event inspired Verdi’s opera Un Ballo in Maschera.

Although he was loved by some and hated by others, King Gustav’s role in the Swedish Enlightenment is clear. He was an educated and cultured man who welcomed artists and writers to court. Despite the pressures he faced at home and abroad, his reign saw huge advancements in art, literature and design. 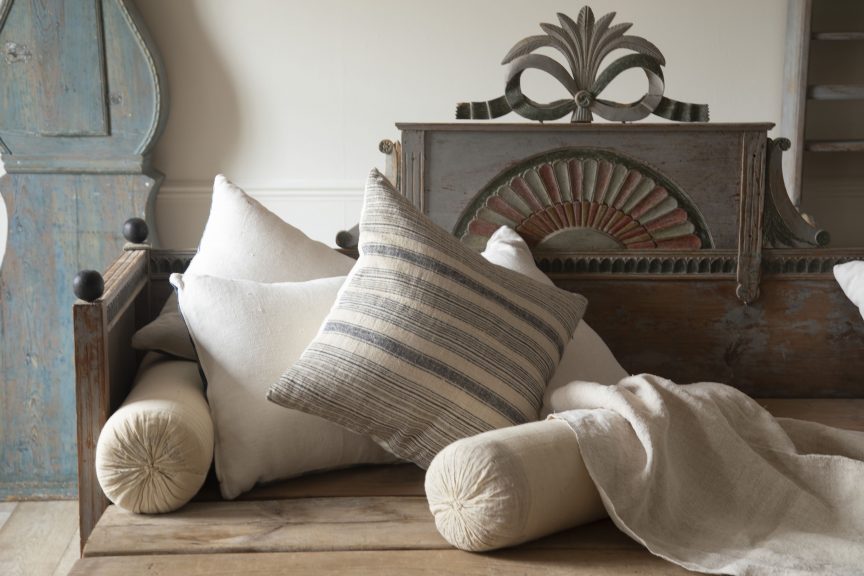 In France, Louis XVI reigned during one of the most significant periods of French furniture design. His style was more refined than his predecessors, but maintained the opulence and grandeur. King Gustav spent a crucial period of time in Paris and at the royal palace in Versailles. This experience left him determined to make Stockholm the ‘Paris of the North.’

Today, Swedish design is generally associated with minimalism and muted colours. Much of Gustavian style did display these trends, but period pieces can actually be very splendid.

The entertainment rooms in palaces and noble houses during this period were full of gilded furniture and grand mirrors. At a glance, you might be in a French 18th Century palace. 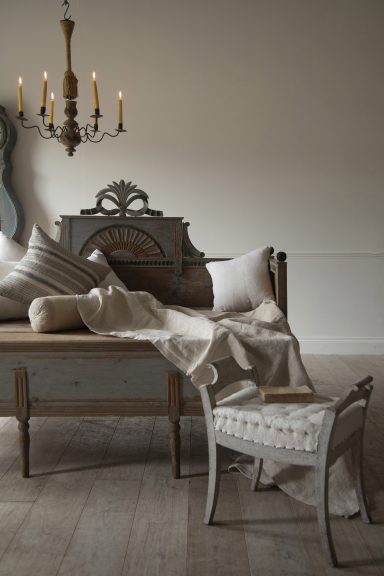 Across Europe, design was influenced by the discovery of Pompeii and Herculaneum in the early 18th Century. Artistic concepts were completely overhauled by the exposure of this clean-lined elegance.

At Stockholm Palace, you can view King Gustav’s Museum of Antiquities to get a sense of his fascination with the classical. The museum displays a large collection of sculptures which the King brought back from his ‘grand tour’ around Italy.

The Pompeian style is evident in Gustav’s Pavilion at Haga Park. The interiors of the Pavilion feature marble columns and rich detail. King Gustav commissioned Louis Masreliez for the design, who went on to define the style of the period.

The impact of neoclassicism is clear in Gustavian furniture. The pieces are architectural in form and display symmetry, columns and carved detailing. The classical inspired Swedish furniture's trademark restraint, as it moved on from the elaborate rococo period. 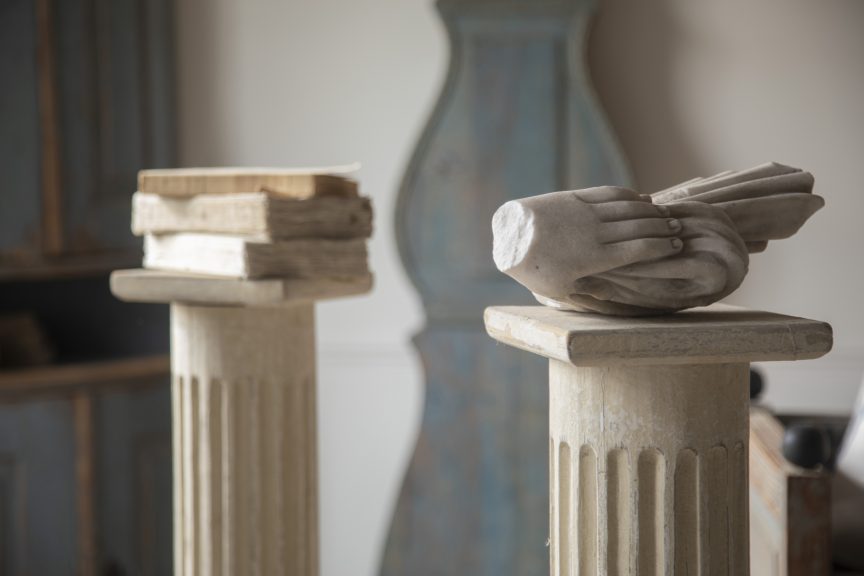 Despite all of these influences, Swedish style is inherently… well, Swedish.

French 18th Century design had a huge impact on King Gustav, but the Gustavian interpretation was more refined. In fact, Gustavian furniture is a loyal tribute to Swedish ideals.

Swedish winters are long and dark, which still shapes their interior design to this day. The priority has always been to bring light into rooms, through pastel colour palettes, giltwood and plenty of mirrors.

Although the décor in palaces and noble houses was grand, Gustavian style became more homespun as it spread throughout Sweden. Often the carved frames of chairs and sofas were left exposed and the furniture was painted. Local woods were used such as oak, beech and pine.

Although Gustavian designs were simple, they were well-executed and designed for their purpose. Function was a priority and lots of corner cabinets and console tables emerged.

Shape and detail helps to identify the Gustavian: bonnet topped cupboards; barrel-backed chairs; fluted legs and carved decoration to name a few. Some of the most distinctive carved motifs are guilloche (woven circles), rosettes and scallop detailing. 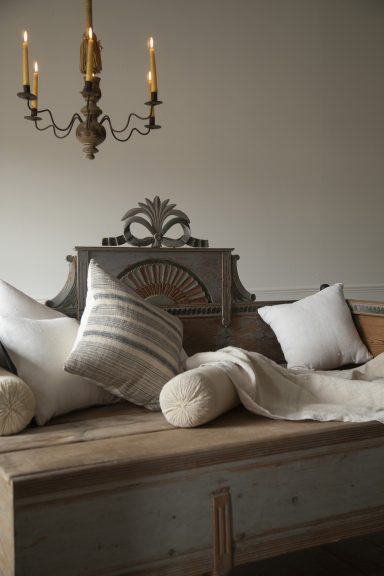 So, why does this style have such a profound influence?

The most obvious reason is that Gustavian furniture is easy to live with. It is equally suited to a grand London townhouse, a country cottage, a chalet or a villa. Curved lines and carved motifs make these pieces decorative, but the silhouettes and paintwork are simple.

There is also a certain magical quality to Gustavian period and style pieces. Furniture with its original paint gives a lovely fairy-tale finish, especially in a muted colour palette. It's feminine, but not overtly so. Gustavian pieces were often fairly small and mobile and they were meant to accentuate a space, not dominate it. This is a versatile style as a result, whether it's used in small doses or as an entire decorative scheme.

No Gustavian interior is complete without the iconic Swedish Mora clock, which is a piece as rich in history as it is beautiful. Mora clocks are a testament to community craftsmanship. In the early 18th Century, the town of Mora suffered a bad drought and many people fled to Stockholm. Here they would learn new skills and trades, including clock-making.

Upon their return to Mora, a local industry started as families worked together to manufacture these iconic clocks. Mora clocks radiate the quiet peace and grandeur of Gustavian style and have a beautifully rounded shape. A Swedish Mora Clock is often the finishing touch in a Gustavian inspired setting. 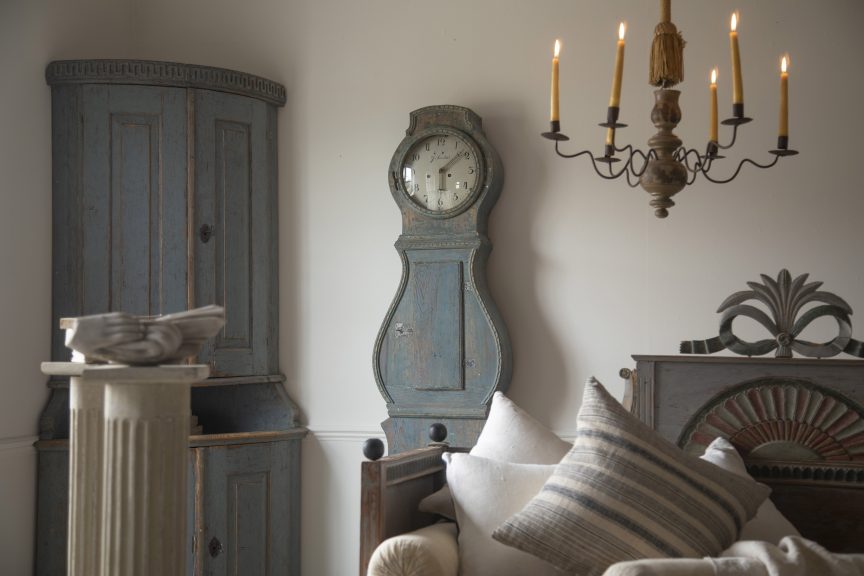 Gustavian furniture has a valuable place at Lorfords and Swedish pieces are always coming through our doors.

Browse Gustavian daybeds, sofas, chairs, Mora clocks and other antiques on our website or come and see them in person.

Our two hangars at Babdown Airfield and showroom in Tetbury give Gustavian pieces the space and context they need to do them justice.

Visit our lookbook, ‘Swedish Enlightenment,’ to view our selection of Gustavian furniture.