Whilst revolution brewed, a majestic furniture style emerged in France. Louis XVI and his infamous wife, Marie Antoinette, oversaw a period of design that is still coveted today. 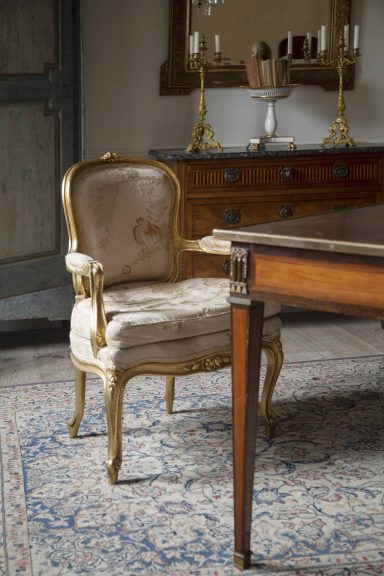 Louis XVI was the last of the Bourbon monarchs. He reigned from 1760 to 1789, ascending to the throne at just 20. Indecision and weakness of character plagued the King, who never quite lived up to the legacy of his ancestors.

Louis Seize was married to Marie Antoinette in order to assert diplomatic links with Austria. What the King lacked, the Queen made up for in many ways. She was the last Queen of France, and Marie Antoinette is remembered for her headstrong and extravagant ways.

The reigns of his predecessors were characterised by their own design preferences. The intention of his great-grandfather Louis XIV was simple: splendid, extravagant furnishings that reflected the monarchy in all its glory. Known as, 'The Sun King,' the sun was the royal emblem and the dominating principle of this reign was brilliance.

His grandfather, Louis XV, embraced the Rococo style and his furniture embodies femininity, comfort, and curving lines. Due to his string of mistresses, he asked for shorter chair armrests to accommodate their full skirts.

Whilst each King Louis had their own personal taste, certain pieces of furniture defined the whole dynasty. Furniture for specific functions became popular; Louis XIV introduced the commode and popularised writing desks and console tables. His reign was the apogee of giltwood furniture and his successors kept such features in their own design. 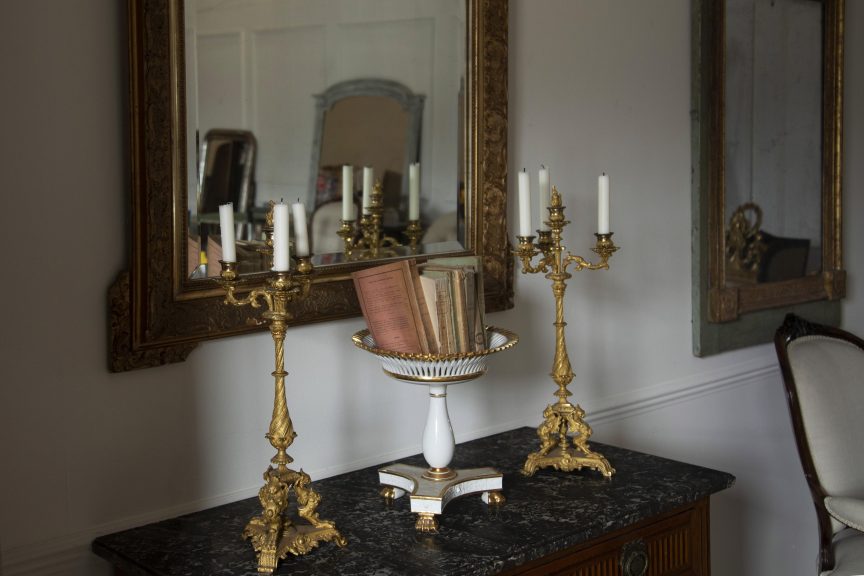 In order to discuss Louis XVI design, we must delve into the socio-political tensions of his reign.

The King's life ended at the guillotine, accused of treason. Marie Antoinette's lavish tastes provoked the public and she met the same fate as her husband.

The royal couple was not ignorant of the angry masses, but their efforts to appease them were minimal. Pattern and design in furniture made use of the natural grain of the wood in an effort to identify with starving Parisians. The King once wore a peasant hat to sit for a portrait in an attempt to show solidarity, but the seeds of resentment were already firmly sown in the French people.

Louis XVI inherited financial problems and exacerbated them with his careless spending. Heavy taxation further alienated the people, particularly as the Queen ordered vast amounts of furnishings. Legend says Marie Antoinette once responded to news that the people had no bread with the classic remark, 'let them eat cake.'

When the monarchy was overthrown, royals and nobles had to forfeit their luxuries, and swathes of furniture from this period were lost. Therefore, a period Louis XVI piece prompts real excitement both for its beauty and historical context. 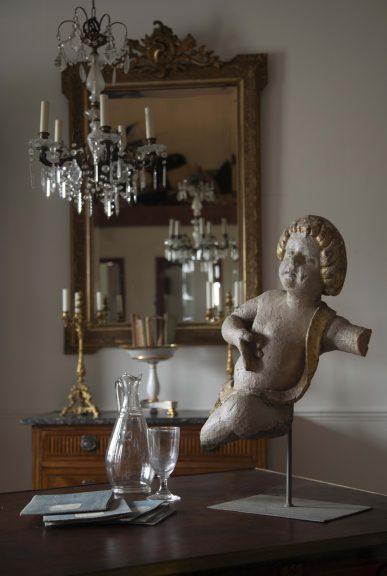 Design under Louis Seize was a mixture of continuity and innovation. The relationship between France and the classical world evolved over time and French neoclassicism was particularly aligned with the English style. English influence during this period is clear in the use of mahogany for chair backs and veneers.

Furniture design under Louis XVI consolidated previous eras in many ways. There was no dramatic overhaul or principled u-turn, but the changes transformed French furniture into a force of beauty. Louis XVI furniture is more angular than earlier periods, with straight lines and geometric patterns. Restrained, short tapering legs replaced the cabriole style associated with Louis XV.

Neoclassical influence already existed in France, known as goût grec or ‘Greek taste.’ The discovery of Pompeii and Herculaneum fuelled enthusiasm for this new architectural style. Marie Antoinette constantly commissioned pieces in this style for her quarters at Versailles. The classical influence was expressed through motifs as well as shape. Louis XVI pieces exhibit plenty of carved friezes, cornucopia, egg and dart, and oak and laurel leaf.

However, this was still the opulent French monarchy. Bronze fittings adorned almost every piece of furniture and ormolu mounts were common. Marquetry evolved away from florals and towards the geometric, so lots of beautiful games tables emerged. The commode, ushered in under Louis XIV, remained iconic under his great-grandson. 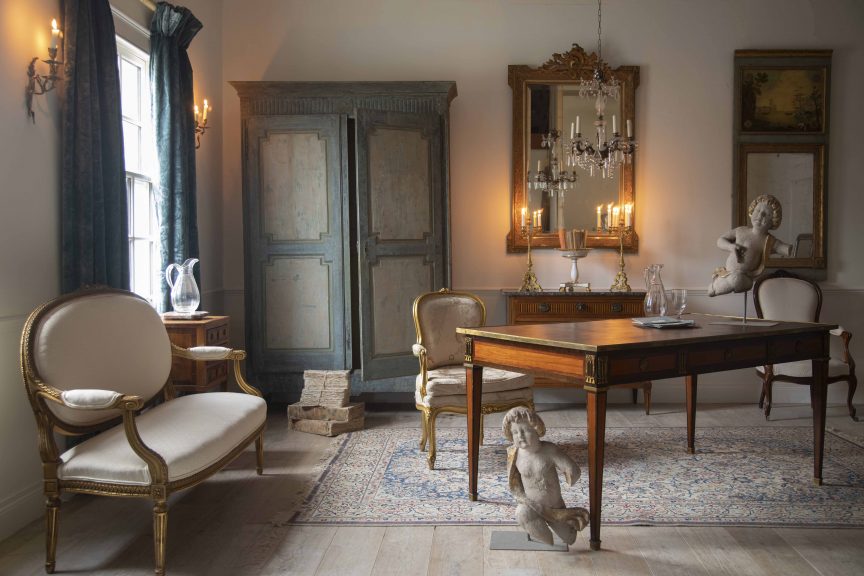 Louis XVI’s reign is often considered the golden age of cabinet-making. Marie Antoinette imported many designers from Germany and Holland. The Queen's Austrian roots had a clear influence on design and these individuals outshone their French counterparts.

Jean-Henri Riesener held royal patronage from 1771 and is one of the most prolific designers of the time. He preferred exotic, luxurious materials for marquetry and ornamentation. His works feature gilded lacquer, mother-of-pearl and gilded ormolu mounts.

18th Century French furniture would not have reached its full potential without Georges Jacob. Jacob began working in the style of Louis XV, but swiftly adopted the style of the new King. This latter period is when his innovative designs reached their peak.

Georges Jacob's motif of triangles with rosettes adorn the joints between the arms and backs of chairs. In the late Louis XVI period, Jacob decorated the square section at the top of chair legs with daisies or small suns.  This master cabinet-maker pioneered circular seat frames and spiral armrests, which became distinctive features of this period. His patrons included Marie Antoinette and the Prince of Wales.

The legacy of Louis Seize 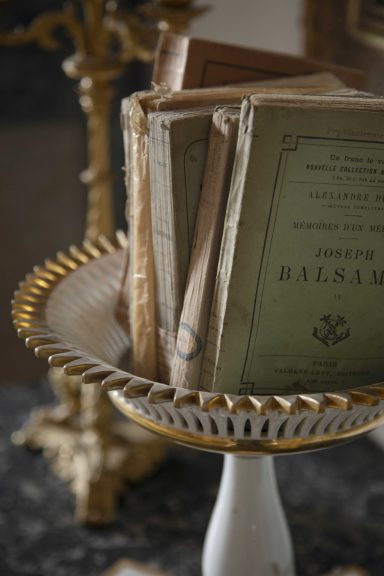 Louis XVI furniture reflects a truly special period of design. Although his reign lasted just under 30 years, its influence on design continued into the Empire period. This period remains one of the most widely emulated furniture styles.

This style has charmed collectors for centuries and it's not difficult to see why. Whether you are looking for a few antiques to compliment a contemporary scheme, or want to perfect a period home, Louis XVI is the pinnacle of French design.

Louis XVI furniture suits modern interiors because of its simple elegance. Don't be afraid to mix ornate French furniture with modern art and sculpture, there is no need to stay in the confines of one style!

We have a large collection of Louis XVI pieces here at Lorfords. This was the heyday of iconic antiques, including the bureau plat, stunning armoires, and elegant giltwood chairs. Browse these pieces and more in our Tetbury showroom and hangars at Babdown Airfield.

For a taste of the Louis XVI style, visit our lookbook, 'The Last King,' to browse a selection of our pieces.