The Regency was the pinnacle of British sophistication and a pivotal period in design. It was a time of fascinating architecture and elegant furniture, but the influences in this period were far from straightforward.

At the heart of the Regency was the Prince Regent himself. In 1810, George III became seriously ill and was deemed mentally unfit to rule. The Regency Act was passed the following year, which allowed his son to rule on his behalf. Technically speaking, this period is the nine years that George IV was Regent. 1820, the Prince Regent became George IV and King in his own right.

But in reality, Regency style and design was more enduring and covered more or less the first 30 years of the 19th Century. Nonetheless, it is rightly seen as a reflection of the character of the Prince Regent. He reacted against the frugality of his upbringing under his father, George III, with extravagance. George IV was seen as a hedonistic and gluttonous young man, ridiculed by cartoonists at the time.

The concept of The Grand Tour and broadening one's horizons was long gone. Britain was suffering a trade blockade due to its war with France, so young men wined and dined in London’s most prestigious venues. The ‘dandy’ emerged, and these men modelled themselves on the styles of the Prince Regent.

Yet, even more so than food and women, George’s great passion in life was building, designing and collecting. The Prince Regent spent the first few years of his reign commissioning vast amounts of furniture. The interests of the Regent, as well as the wider context of the Napoleonic wars, help us to make sense of the paradoxes of Regency style. 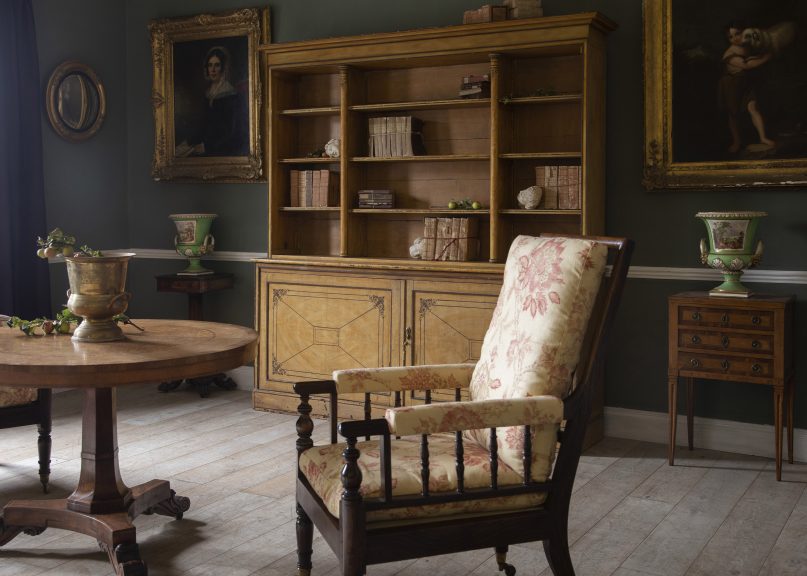 Regency coincided with Empire style across the channel in France. Napoleon’s successful campaigns in Egypt meant that Egyptian motifs frequented French furniture. The Prince Regent wanted to match, if not surpass, the architecture and design of his rival.

Neoclassical design was very much in vogue already, but Regency designers followed classical precedent in a far more prescriptive sense. They did away with the fussy ornamentation of Adam style and stayed true to classic simplicity of form.

Exact copies of ancient Greek, Roman and Egyptian pieces were made and classical motifs were incorporated into Regency furniture. Regency brings to mind heavy wood and this was certainly the heyday of mahogany and rosewood. There was a newfound appreciation for surface and beautiful patinas, particularly the bold figuring of exotic timbers.

Regency prioritised straight elegant lines and beautiful sabre or concave legs. The period did away with marquetry and intricate carving, preferring brass metalwork for ornamentation.

But no single set of characteristics can define Regency. In fact, it was a melting pot of foreign and home influences. It was refined British elegance juxtaposed against extravagance. Many styles were revived or imported. There is undoubtedly a strong oriental influence in Regency furniture. Chinoiserie and japanning were popular, Indian styles were copied and bamboo surged. 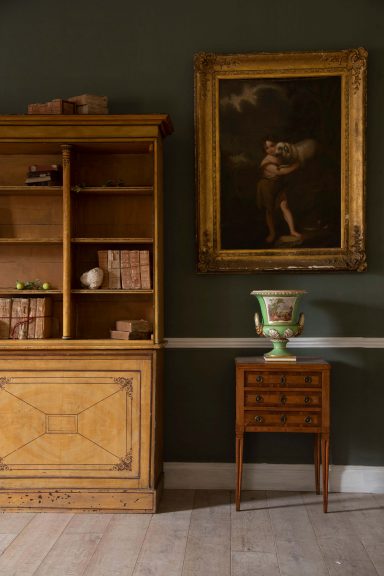 So, who were the main players in this design revolution?

The strong classical influence on the Regency period was fuelled by new publications about classical art and architecture. Thomas Hope published Household Furniture and Interior Decoration in 1807, which was full of classical designs inspired by his extensive travels. The ideas in this book would have a profound influence on Regency style.

Hope wasn't alone, though. The architect Henry Holland sent designers to Rome to make drawings of classical objects. These were published in the book, Etchings of Ancient Ornamental Architecture, in 1799-80. Thomas Sheraton’s Cabinet Dictionary of 1803 shows Grecian couches, which introduced the daybed into Regency Britain. Animal motifs and ‘sabre’ design legs were engraved in this book- features that would become the distinctive characteristics of Regency furniture.

It is impossible to mention Regency without the name John Nash. Nash was court architect to George IV and their visions were very much aligned. With his remodelling of the Royal Pavilion in Brighton, Nash realised the Prince Regent’s dream of a lavish palace in the oriental style. This extraordinary building is clearly influenced by Indian and Chinese styles. Nash was also the brains behind modern day Regent Street and the terraces of Regent’s Park.

Furniture manufacturers of the time were eager to embrace this new style. Renowned cabinet makers Gillows led the charge, incorporating Regency traits including lion paws and reeded carving into their finely crafted pieces.

Furniture from this period is highly sought after and has a lasting legacy. Regency chairs are particularly renowned, with their crested rails, low curved backs, brass inlay and sabre legs. By the end of the period, cotton or linen upholstery became the norm and chintz flourished. The Prince Regent loved dining in style and prioritised these spaces in his homes. Because of this opulent attitude to dining, you can discover wonderful sets of Regency dining chairs.

Furniture companies began making lots of tables made for specific purposes. For example, extendable tables, nests of tables, kidney tables, sofa tables and side tables were all produced throughout the period. Regency tables are often round and pedestal bases with tripod legs are common.

However, it wasn't all about furniture and mirrors were a significant feature of Regency style. Circular convex mirrors were particularly prominent in this age, copied from France and seen as a symbol of wealth. These mirrors were supposedly put in dining rooms so that butlers could keep an eye on the progression of guests through each course. Indeed, convex mirrors were so popular in Regency England that they are the only type of mirror to be listed in the mirror section of Sheraton's Cabinet Dictionary. However, you also find beautiful overmantle mirrors from the Regency age.

Regency style has lasting attraction. It is full of unique features and yet still inherently classic. As a result, the architecture and design of this period is very influential and reflects socio-political movements. 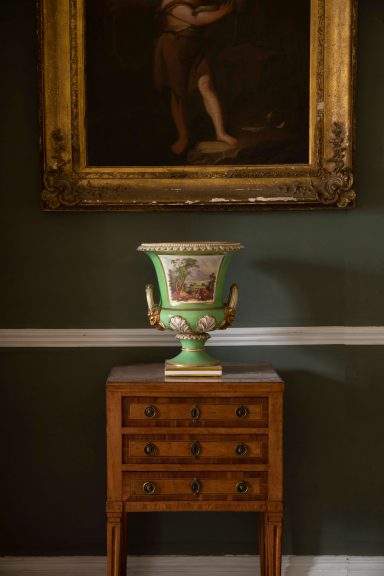 Regency furniture is a delight to have in your home and new pieces are always coming through the doors here at Lorfords. Come and visit us in our hangars at Babdown Airfield and our Tetbury shop to see these pieces in all their glory.

Visit our lookbook, 'Regency flair,' to browse some of the Regency furniture we house.