The rococo style, defined by its sinuous curves and natural beauty, swept through Europe in the 18th Century. Sweden was then something of a remote northern outpost, but its craftsmen were not to be underestimated. The Swedish Rococo period saw a new royal couple take to the throne and the Swedes' elegant take on the style flourish.

Sweden’s artistic ‘golden age’ spanned three design periods, which naturally followed fashions in Europe’s cultural heartlands. The dramatic Baroque period (1650-1750) gave way to Rococo (1750-1775), which was followed by the refined Gustavian era (1775-1810). All of these styles were influenced by trends in France and England but came later to Sweden due to its location and comparatively small population. 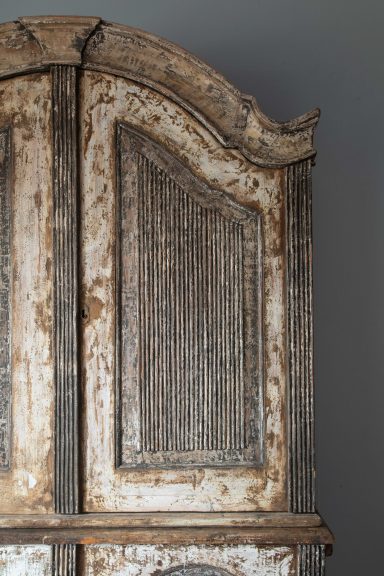 Several events sparked Sweden’s design prowess in the 18th Century. King Karl XII’s wars came to an end in 1718, ushering in a new period of peace and prosperity. Sweden’s upper and middle classes were eager to beautify their homes, and those with the money to do so indulged in lavish interior decoration. Secondly, the Swedish government announced a ban on imported furniture in 1731. In the early part of the 18th Century, Sweden relied heavily on imports from England and France. This measure intended to support native craftsmen and encourage domestic excellence, a move that certainly paid off. Lastly, the fall of the Caroleans brought new royals to the throne. King Adolf Frederik and Queen Lovisa Ulrika of Prussia were a fashionable young couple, influenced by the ideals of the French Enlightenment.

When rococo arrived in Sweden around 1750, the style had already been thriving in France for 20-30 years. The architect Nicodemus Tessin the Younger was overseeing the build of The Royal Palace at Stockholm when he died in 1728, leaving the project incomplete. Luckily for Sweden’s cultural legacy, Tessin had chosen his successor wisely. He left the commission to his promising young student, Carl Hårleman. Hårleman demonstrated a mastery of architecture and became one of the most influential figures of the 1700s. Indeed, the grandest manifestations of the rococo style were in Sweden's great palaces.

Swedish Rococo in the royal palaces

Hårleman needed to complete and furnish The Royal Palace in Stockholm for the needs of King Adolf and Queen Lovisa. He largely followed Tessin’s designs, except in one crucial respect. Tessin’s plan revolved around the baroque style, but Hårleman – with a keen eye on fashions in France – adapted it to incorporate the new rococo trend. This was not necessarily a drastic change; we sometimes describe the rococo style as the final expression of baroque. Indeed, the late baroque period had already moved away from overly dark and imposing furniture. Softer designs, often with a painted finish, were increasingly popular. This transitional phase paved the way for rococo to take centre stage.

Queen Lovisa was far from a passive patron; she was one of Europe’s leading cultural monarchs and favoured the playful rococo style. Fortunately, The Royal Palace had many, many rooms to fill. French cabinet-makers came over to contribute designs and teach Swedish craftsmen their skills. One of Hårleman’s major contributions to Swedish cultural history was his insistence on educating others and subsequent generations in order to spread techniques and skills. 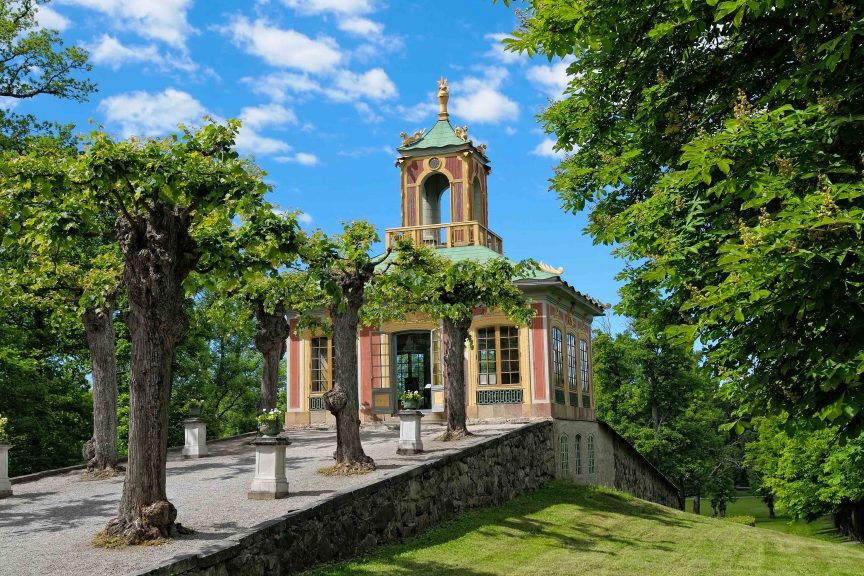 The Chinese pavilion on the grounds of the Royal Palace at Drottningholm.

At Drottningholm, where the royal couple resided until their new palace was ready, designers refurbished parts of the palace in the rococo taste. A major, and often overlooked, element of Swedish Rococo design was the chinoiserie style. The Swedish East India Company was formed in 1731, sparking enthusiasm for all things oriental. The Chinese Pavilion at Drottningholm, designed for Queen Lovisa’s birthday, is a fantastical palace in itself that combines European Rococo with exotic eastern taste. Examples of classic Swedish Rococo furniture adorn the rooms at Drottningholm to this day. 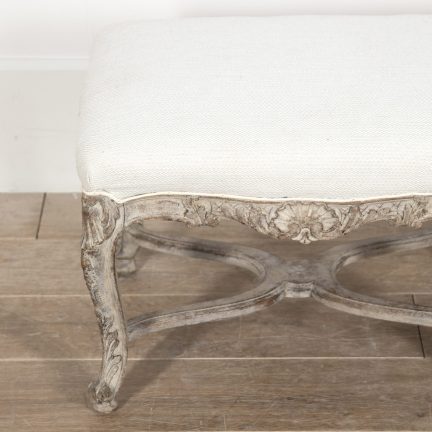 Rococo is certainly heavy with ornament and celebrates beauty for beauty's sake, but not without thought. The word rococo combines two French words: coquille (shell) and rocaille (stone). Nature’s innate beauty is certainly at the heart of this hedonistic style. Rococo reflects the natural world in both form and decoration. It has a gentle fluidity and embraces asymmetrical shapes and ornament. Any right-angles are softened with rounded corners to create welcoming designs.

Swedish architects and designers naturally drew from French and English designs, but they also put their own stamp on the rococo style. Over in France, Louis XV's interpretation of rococo was at the frivolous and elaborate end of the spectrum. Meanwhile, the style propounded by leading architects such as Hårleman maintained the Swedish sense of refinement and conservatism.

The Swedish take on Rococo 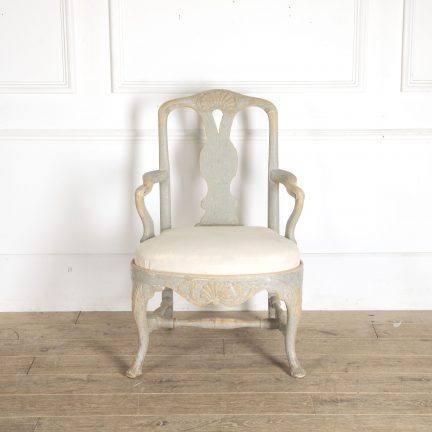 Swedish Rococo cabinets feature pronounced bonnet-tops and doors with gracefully shaped panels. Chairs and tables exhibit beautifully carved friezes and rest on cabriole legs. The Swedish Rococo chair is one of the most famous chair designs in history and the model is still very desirable today. These chairs have simple carved wood frames, and the most popular design has an open fiddle-shaped back with a single gently carved splat. Many examples of rococo chairs remain today in Sweden's great palaces and country houses.

Sweden’s painted furniture defines its legacy, and the Rococo period was no different. We are fond of Swedish antiques for their pastel colour palettes, yet the popularity of black-painted rococo furniture is less well-known. Craftsmen also adopted rich and exotic Chinese hues, so a diverse range of painted furniture survives from this period. There is always a difference between furniture produced in Stockholm, Sweden's capital and cultural centre, and country pieces. Stockholm rococo pieces might have more finesse, but country versions with those tell-tale rococo curves are charming in their own way.

The transition from rococo to Gustavian was similarly subtle to that of late baroque to rococo. Queen Lovisa's place in the royal household continued, as she served as Queen Mother to King Gustav. In addition, many prominent designers of the rococo era fused old and new fashions in their designs. It wasn’t until the end of the 18th Century that rococo's distinctive curves fully gave way to straight-lined neoclassicism. 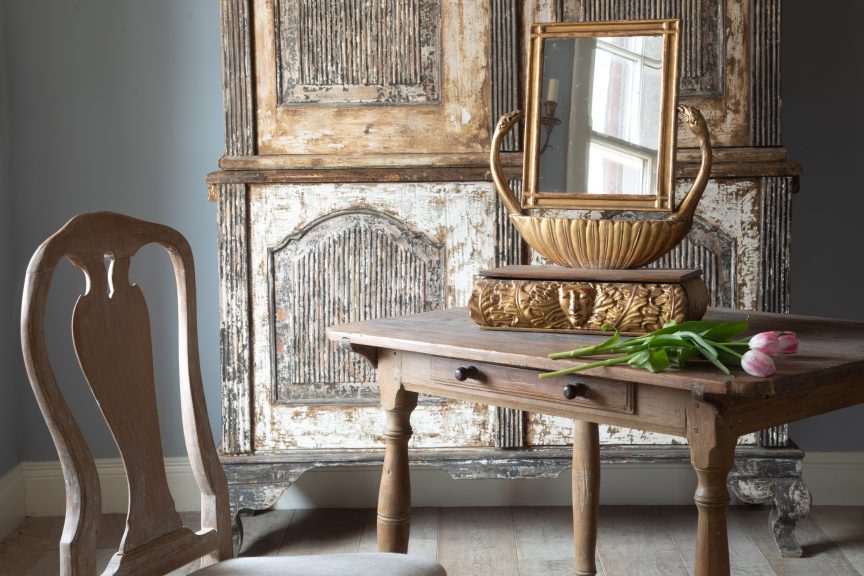 Design in Sweden underwent exciting development and change throughout the 18th Century. The result is a plethora of stunning antiques, offering furniture and decorative pieces for every taste. Swedish Rococo furniture and furnishings are an excellent choice for today’s home. The graceful curves and fresh paint colours make rococo suitable for traditional and contemporary interiors alike. The soft femininity of the style is perfect for a bedroom or dressing room, whilst the flora and fauna themes lend themselves to a conservatory or orangery setting.

Browse our collection of Swedish Rococo antiques here and all of our rococo-style pieces here. View our lookbook 'Sinuous curves' for a little inspiration.