The powerful allure of antique mirrors

Mirrors have always been a symbol of status and luxury. Antique mirrors, with their charm and opulence, constantly inspire modern interior design trends. 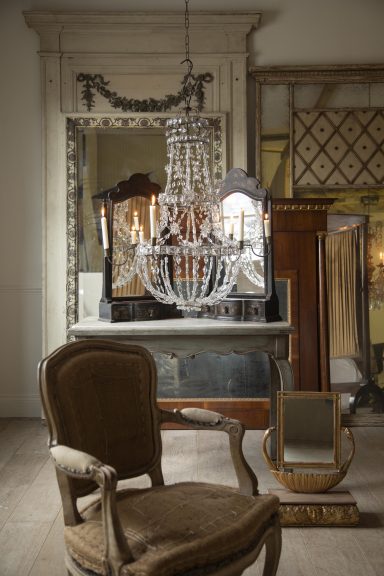 Mirrors were not always the clean reflective glass they are today. Nature provided the first concept of reflection in pools of water and later in polished stones of volcanic glass. The Romans created the first primitive looking glasses, usually in the form of a hand held mirror.

As soon as they were invented, mirrors were associated with vanity. The ancient myth of Narcissus falling in love with his own reflection in the water is often seen as a moralising tale of human arrogance.

In the dark ages, the concept took a back seat as economic and cultural advancement slowed. These captivating objects couldn't stay away for long and came back with full force in the 17th Century, when the free-standing mirror arrived. From this point on, mirrors were an established tool and integral part of home décor. 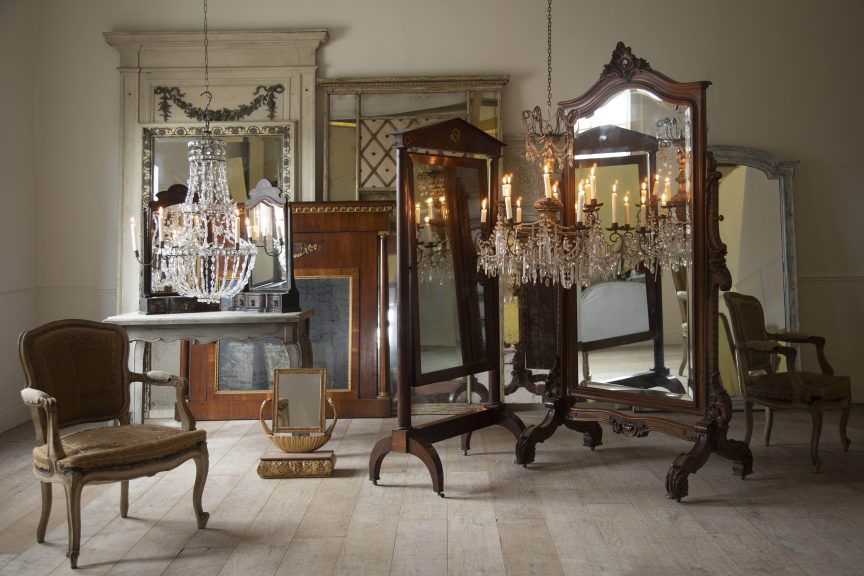 Venice led the way to create what we recognise as a mirror today. The craftsmen of Murano were considered master glassmakers and for centuries Venetian mirrors were the height of luxury. Their method evolved with time, experimenting with tin, silver and mercury amalgams and even rock crystals.

The Venetian government held the secrets of their success close to their hearts and leaking trade secrets was punishable by death. For over 150 years, Venice was Europe's leading exporter of the beautiful objects.

Of course, this monopoly couldn’t last for long and in France Louis XIV hired a rival band of glassmakers. The result is clear in the magnificent Hall of Mirrors at Versailles. 357 mirrors in one corridor was the ultimate display of economic propensity and French craftsmanship.

It wasn’t all beauty and glamour however, and serious health problems became associated with crafting mirrors. Louis XIV’s glassmakers began to die from health complications, most likely because of the heavy metals and toxic fumes they worked with. Medical understanding was limited, so Venice and France each thought that the other was trying to sabotage them. 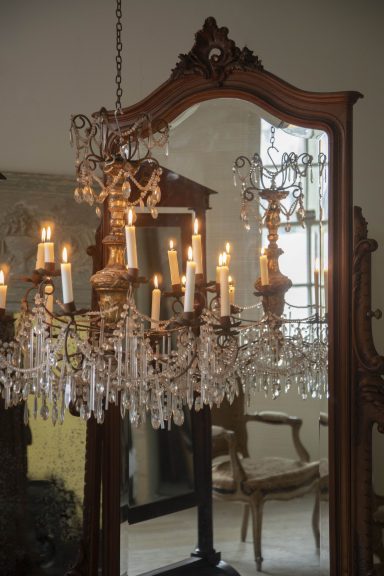 As well as being physical demonstrations of wealth and status, mirrors have many other connotations. They have long been associated with magic and illusion. The looking glass was an object of fear and longing, with a hypnotic effect on the beholder. Although superstition has waned, the allure of mirrors hasn’t.

It is a well-known trick of the interior design trade to use mirrors to maximise space. Small rooms benefit from carefully placed mirrors which reflect the light. Placed between or opposite windows, they really are a saving grace.

Toby Lorford sees mirrors as an integral part of the home: 'mirrors fundamentally change not only our perception, but also what we physically see by increasing light levels in a room.'

Mirrors and lighting are the ultimate combination to unlock your interiors. Consider wall lights or candle sconces either side of a large antique mirror to create atmosphere and illumination. If you really want to make a statement, it doesn't get much more opulent than a large gilt-framed mirror underneath a crystal chandelier.

An antique mirror is the perfect piece for an otherwise contemporary interior, because they are a simple way to introduce individuality and depth. 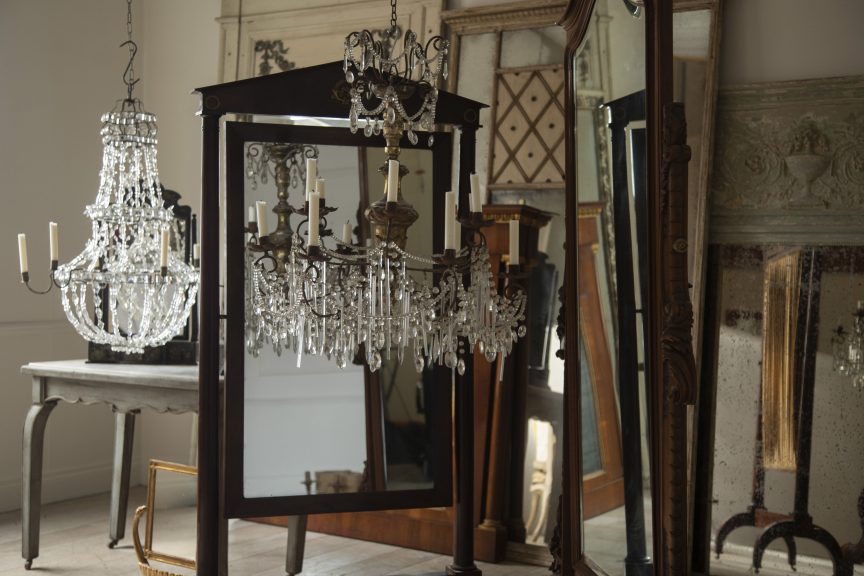 There are a huge variety of antique mirrors, reflecting the craftsmanship and tastes of years gone by. From the gentle femininity of Venetian mirrors to monarchial crested styles, incorporate a piece of history into your home.

Convex mirrors saw a resurgence of popularity at the beginning of the 19th Century. In pairs, convex mirrors are a great source of symmetry. They are small and neat, reflecting light outwards. A wonderful anecdote suggests they were first invented so that butlers could keep an eye on the progression of guests at dinner.

For a grander statement, consider investing in an overmantle mirror which will transport you back to the dining rooms of Regency England. Serve modern-day needs with traditional shapes, such as free-standing cheval mirrors or elegant dressing table mirrors.

A sunburst mirror is a wonderful statement piece to bring memories of warmer climates into your home. The sunburst motif originates from the Catholic Church during the 17th Century, but supposedly it was Louis XIV- 'The Sun King'- who invented the mirror itself.

Shape is just one aspect of the allure of an antique mirror and the glass itself is often a major attraction. Unlike the almost glaring clarity of a modern mirror, antique mirrors have a mellower, slightly grey tone to them.

Increasingly, contemporary companies are recreating foxed glass mirrors. This effect happens when hand-silvered glass has deteriorated or lost its clarity over time. The result is a more muted reflection, often with distressed patterning.

Instead of detracting from the appeal, foxed glass actually has a softer effect than modern glass and creates more visual texture in an interior. Use foxed glass for kitchen panelling or in a bathroom for a touch of vintage luxury. 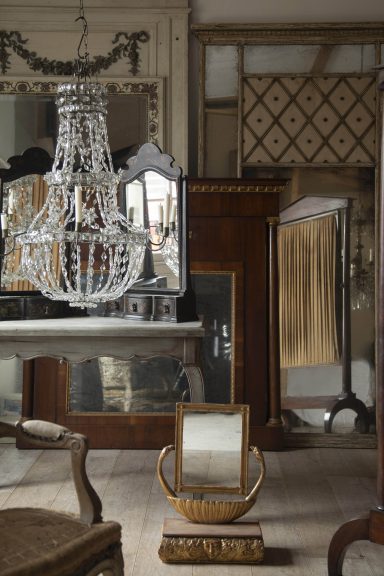 If you stroll through our hangars at Babdown Airfield, you will catch sight of yourself more than a few times. We pride ourselves on our collection of antique mirrors, which is always expanding. Whatever your interior design needs, you are bound to find the right piece in one of our showrooms.

Toby Lorford explains why you need look no further than Lorfords: 'From 18th Century to contemporary art mirrors, from small convex mirrors through to three- metre- high styled pieces... we have over 500 mirrors in stock at any one time for you to choose from.'

Our website makes it easy, with all our mirrors in one place and categorised by different styles. If you're overwhelmed by choice, visit our lookbook, 'Hall of Mirrors,' so you can sample some of the pieces in our collection.