Our showroom doors are closed but we are still open and fulfilling deliveries following government guidelines. Get in touch to find out how we can help.

Spring is springing up everywhere.

With the arrival of the first crocus, our thoughts inevitably turn to the outdoors and the garden - or the terrace, or the backyard, or the window box. Whatever the extent of your plot, one thing’s for sure, we love our gardens. It’s true to say that, over the last few years, the garden and all things horticultural have undergone a major image change. Gone are the days when having a nice garden meant little more than a well-tended lawn and herbaceous border. These days we expect our gardens to be every bit as stylish and distinctive as our homes – a Victorian style patio set and water feature just won’t cut it.  Planting and landscaping might be a garden’s backbone, but it’s the added structures and embellishments that transform it into something really special. But, while many of us are used to furnishing our homes with antiques, how many of us would consider buying period pieces for the garden?

Our love of gardening is as old as civilisation itself. The ancient Greeks were the first people in Europe to create gardens and adorned them with marble and bronze effigies of gods and mythological heroes. The Romans were equally keen on their gardens; some of the oldest surviving examples of garden furniture are in the gardens of Pompeii. Our Celtic ancestors cultivated small enclosures and the Tudors had their knot gardens – tightly clipped box hedges laid out in intricate patterns.  But it was in the late 1600s that the fashion for decorating gardens really took off in England. This period saw the fashion for highly formal French-style gardening, modelled on the works of Andre Notre, Louis XIV’s gardener at Versailles. When Charles II regained the English throne in 1660, one of the first things he did was to ask King Louis if he might borrow Le Notre. The aristocracy were keen to follow suit and before long, grand parterres and avenues, complemented by numerous statues designed to invoke classical settings and terminate views, were the order of the day. At first the taste was for statues depicting figures from Greek and Roman mythology – the Borghese Gladiator and Hercules swinging his club were particularly popular. The earliest ornaments were carved from stone, or, for the very wealthy, marble or cast lead. As the fashion for French style gardens took hold amongst the Francophile aristocracy and those eager to copy them, a vast repertoire of ornaments were introduced into the garden, including classical vases, fountains, obelisks, balustrades and furniture. By the middle of the eighteenth century the strict formality of the French garden had yielded to something softer. Designers now sought inspiration from the landscape itself. Rolling lawns and serpentine ponds became the order of the day and, in the hands of designers like William Kent, the garden became a complete work of art. Ornaments in the form of statues, temples or follies took centre stage with every element carefully chosen to work in harmony with its neighbour. Iconography was the order of the day and the positioning of garden ornaments often had a deep symbolic meaning which, although less decipherable today, would have been easily understood by most educated people at the time. This period saw the creation of the celebrated gardens at Stowe in Buckinghamshire and Stourhead in Wilstshire. Garden “ornaments” might include a replica of the Pantheon in Rome, a temple dedicated to Apollo or an underground grotto, containing that mid-Georgian garden essential: a live hermit, who would be employed full-time as a curiosity for visitors. The job of a hermit could be fairly lucrative but there were strict conditions attached to the job description – a hermit wasn’t allowed to speak and nor could he cut his hair or fingernails.

Whilst few of us have the sort of garden that can accommodate miles of gravel paths and numerous classical temples (or hermits), a well-placed statue or urn can bring a flavour of eighteenth century grandeur to a modern day garden, acting as a focal point and adding a sense of drama. 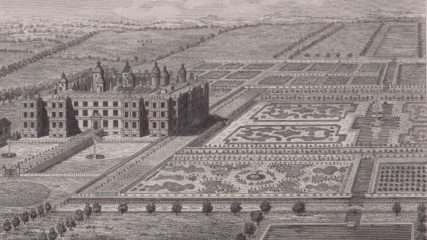 Early examples from the 17th and 18th centuries are rare and, on the rare occasions they do appear on the market, command high prices. More easily available are statues from the nineteenth and early twentieth century. Many of these were made of composition stone or terracotta both of
which became popular in the Victorian period as way of producing good quality garden ornaments that were cheaper than stone. Henry Doulton started making terracotta garden ornaments in the late nineteenth century and by 1900, Doulton were England’s main manufactures, with a range that included window boxes, fountains and sundials. Terracotta is highly durable and has the advantage of being frost proof, enabling it to survive the rigours of an English winter. Composition stone was invented by the Romans but also took off for garden ornaments in the Victorian era. Figures and ornaments are moulded rather than carved, so multiple copies of the same piece could be produced relatively cheaply. Properly weathered, a piece made from composition stone is difficult to tell apart from a carved-stone original.

Garden furniture only started to appear widely in the nineteenth century. Before then the only seating used in a garden would have been benches of marble or stone and these would have only have been within the reach of the upper classes. In the early nineteenth century, as gardening for pleasure started to become a pastime of the middle class, wrought iron seating started to appear. This would have been made to order by the local blacksmith and, for this reason, no two pieces of wrought iron furniture will be identical. Wrought iron fell out of favour as the century progressed but remained popular on the Continent, particularly France where furniture by Arras was made for use in public parks well into the twentieth century.

The Victorian era saw a return to formality with terraces, elaborate flowerbeds and manicured lawns, complemented by a plethora of ornaments 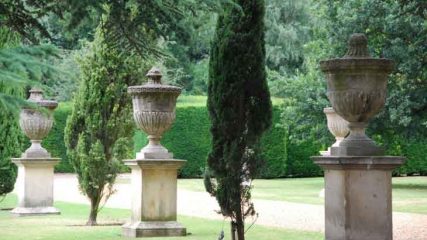 once again being de rigeur. Mass production, thanks to the Industrial Revolution brought garden furniture within the reach of an aspiring middle class, eager to ape the taste of the gentry in the big house. The invention of cast-iron made their dreams an affordable reality. There were many foundries making cast-iron garden furniture but perhaps the best known is Coalbrookdale.  Based at Ironbridge in Shropshire, the firm began by making architectural ironmongery, such as drainpipes and gutters but by the 19th century it was producing a vast number of garden seats, plant stands, urns and fountains, and all manner of other paraphernalia for the well-dressed garden. Leading designers of the day were commissioned to produce designs and, in its day, Coalbrookdale was a by-word for quality. The foundry is still in business and, as the maker of the Aga stove, still plays a big part in middle class aspirations.

It’s often the case that the most distinctive garden ornaments are made from objects that weren’t originally intended for the garden. If it’s a quirky, original look you’re after, you need to think outside the (window) box.  All that’s needed is a bit of lateral thinking: for example, a gargoyle head 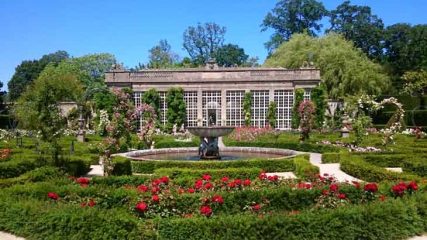 can make an excellent wall fountain. Stone troughs, originally used for animals to drink from, were at one time a feature of every village. Bedded out with plants they make an imposing statement and are highly sought after today. Beaten coppers vats, originally used for boiling laundry or making cheese, are solidly constructed with rivets and take on a wonderful patina with age. They are now enjoying a new popularity, not for laundry but as vast bedding planters. It’s not just large items that make a statement. Vintage garden tools used for gardening can be used as smaller decorative elements leaned against fences or left on tables. Wheelbarrows and old carts are the perfect containers for planting out vivid summer blooms, while garden rollers simply need propping up against an old brick wall to look good. Terracotta flower pots, trowels made of metal from the 1950s, rakes with handmade teeth and branch handles and early 20th century metal buckets and enamelware watering cans all add a distinctive personal touch.

Rolling acres or roof terrace, rustic or urban: antiques offer a stylish way of decorating the “room outside” and there’s not a gnome in sight.