The ultimate guide to vintage lighting

The 20th Century was an era of innovation and flair in the lighting sphere. Two post-war periods saw an influx of new materials as well as a desire to move away from traditional designs. This was the age of the Sputnik pendant, stunning Murano glass lamps, and a host of other revolutionary lighting designs. 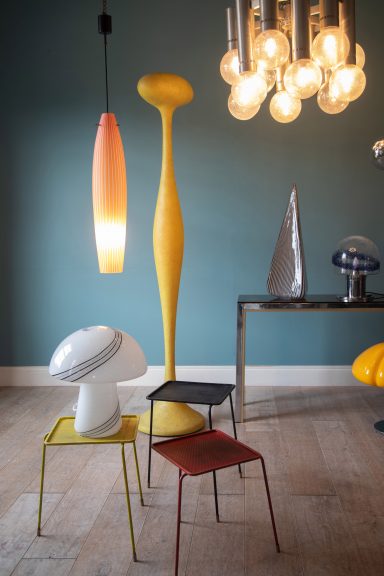 For most of our history, we relied upon daylight, moonlight, and dubious candles to get by. Gaslight arrived in the 19th Century, but it was reserved for commercial and industrial settings at first and had its fair share of drawbacks.

The greatest revolution in domestic lighting came in the 1870s. Joseph Swan and Thomas Edison invented the first commercially viable incandescent light bulbs. These offered a much cleaner and safer solution than gaslighting. The National Grid rose to the challenge of roll-out, and by the end of the 1930s the number of homes wired for electricity rose from 6% in 1919 to 2/3s.

The spread of electricity in the early 20th Century set the stage for some of the most ground-breaking lighting designs in history. Today, lighting is an essential element in the interior tapestry, both in form and function. Layers are key to this, and vintage lighting, with its brilliant spectrum of design styles, can fulfill any brief.

Lighting, perhaps more than any other interior feature, will always need optimal function as well as good looks. A major functional breakthrough came in the development of task lighting in the early 20th Century. Task lighting is designed to aid specific activities, from reading to sewing. It encompasses floor lamps, table lamps, and desk lamps. The last of these has a particularly fascinating history.

Like all great designs, social context played a big role in the development of task lighting. An early entrepreneur in this field was Curt Fischer, who ran a German metal workshop. His company, Midgard, invented its first lights in 1919. These lamps were informed by an acute study of human behaviour. Midgard was deeply inspired by Bauhaus principles and vice versa. Throughout the 20s and 30s, the driving force behind task lighting was factories and workshops. As the 20th Century progressed, they found a whole new relevance through emerging corporate work culture. 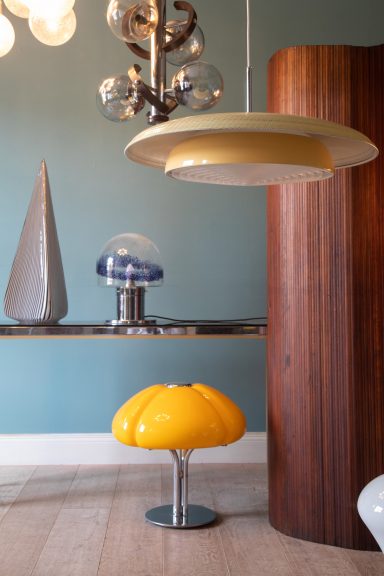 The ergonomics behind early designs responded to common human problems. Slouching over a desk for long hours has long presented side effects. With their articulated arms bending – quite literally – to the user’s will, early task lights addressed this issue.

Despite plenty of experimentation during the early 20th Century, it was one George Carwardine who invented the desk lamp as we know it today. Far from a lighting designer by trade, Carwardine specialised in car engineering. Upon observing the suspension mechanisms in vehicles he worked on, Carwardine realised the same could work for lights.

By using a new sort of spring and pivoting arms, he achieved balance without the need for counterweights. He patented the new helical spring in 1932, but he chose to outsource production to the company that supplied his springs. So, Carwardine worked on new designs whilst Herbert Terry took over the manufacture, and the Terry Anglepoise lamp was born.

The first Anglepoise model, 1227, became available to the general public in 1935. The outbreak of WWII helped rather than hindered them, as they marketed it as the ideal blackout lamp for keeping light localised. Herbert Terry continued to adapt to the zeitgeist throughout the 20th Century. For example, during the 60s and 70s the company produced lamps in an array of vibrant shades.

These early designers and manufacturers were so successful that most later desk lamps have looked very similar. Articulated lamps are still much sought-after, especially in the current mode of home working. It wasn’t always about creating the most focused light possible, as Hans-Agne Jakobsson proved. The renowned Swedish designer mastered anti-glare, diffused and muted lighting. We consider these same qualities indispensable in our interiors today. 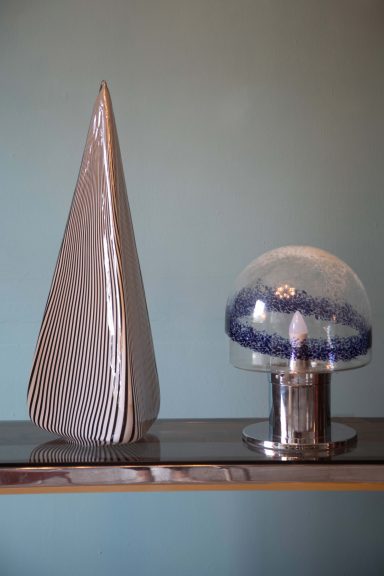 Whether you’re looking for a workshop lamp or a statement chandelier, vintage lighting is such a large pool that you cannot go wrong. If you’re after artisanal beauty, there’s one country that gets it right every time. This feels like an apt moment to quote our interview with Toma Clark-Haines, the Antiques Diva. ‘Lighting is the jewellery of the room and sets the vibe of a space. When it comes to lighting, it’s got to be Italian.’

It's not hard to see why Toma covets Italian lighting. Italy was home to the likes of Gio Ponti and Gaetano Sciolari during the 20th Century. They also had one major asset when it came to lighting design: the glassmakers of Murano. When this stunning hand-blown glass met with stylish Mid Century forms, the result was breathtaking.

Successful designers such as Gino Sarfatti treated lighting as an art form, producing reams of lamps in his lifetime. You appreciate these pieces as an art form before even thinking of them as a light, but function was never sacrificed for style.

Lamps by the likes of Carlo Nason, the famed Murano glass artist, shatter the boundaries of traditional lighting. Colour is the most mesmerising feature in any Murano glass lamp, with a dazzling array of vibrant shades.

As always, Italian manufacturers played a key role alongside these individual designers. Mazzega, for instance, started out in 1946 and still operates today under the grandson of founder Angelo Vittorio Mazzega. The company, then and now, works with the very best international lighting designers – all in the medium of gorgeous Murano glass. When you hear Mazzega, their chandeliers made up of densely packed leaves of Murano glass often spring to mind.

Explosive talent ricocheted through Europe and America in this period and shook the design world. Interior rule books were torn up and rewritten more frequently than ever before. Again, more often than not the most iconic designs speak to their historical and social context. You can almost map social developments through just a few distinctive lights and their makers.

The fabulous Sputnik chandelier was influenced by a fascination with all things space-related in the Mid Century. Its origin is disputed due to the many interpretations of this pendant light, but the very first came from Gino Sarfatti – the Italian modernist designer.

As with George Carwardine, Sarfatti was not a destined lighting designer. He was an aeronautical engineer by trade but seized the opportunity for extra income when his family fell on hard times. Sarfatti called his designs ‘rational’ lights, in reference to their efficiency and simple aesthetic.

The Sputnik, with its branches pointing in all directions, was a very successful experiment in directional light. Its metal form gives it an industrial edge, but it somehow feels glamorous at the same time. This seminal design is named after the Soviet Union’s first-ever satellite, launched in 1957. Sciolari was among the designers who designed their own version of this classic.

Singular design houses shifted seamlessly with changing tastes throughout the century. A good example is Maison Jansen, the Paris-based favourite of royals and elites. They spanned traditional Louis XVI, Art Deco, and modernism in over 100 years of operation. In the 70s, their iconic palm tree and ananas floor and table lamps revived Hollywood Regency glamour with brilliant results. These brass lamps with their natural themes are still in high demand today for bringing exotic luxury to a space. 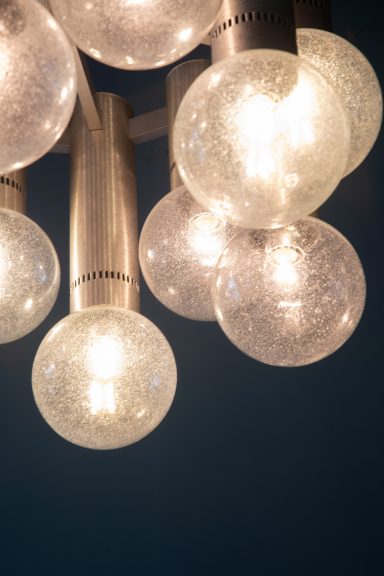 At the other end of the spectrum, the lighting designs of Poul Henningsen are the definition of Scandi restraint. The Danish designer's motivation was akin to that of the Arts & Crafts movement – to improve people’s lives through design. His three-tiered shade designs reduced glare and distributed a soft glow throughout the room.

His first pendant, the PH lamp, was produced in 1926 by Louis Poulson and met with global acclaim. Henningsen designed his first PH Artichoke for a modernist Copenhagen restaurant in 1958. This stylish spiky pendant remains a firm favourite amongst collectors.

The 20th Century saw perhaps the most extensive and successful range of lighting designs in history. The lighting produced in this period is indispensable to our interiors, whatever your personal taste.

The designs covered in this article don’t even scratch the surface of vintage lighting. However, they do give some idea of its sheer quality and range. Shop all our 20th Century lighting on our website, as well as our whole collection of Mid Century design.

Spark your imagination with our lookbook, ‘Iconic retro lighting‘

Sean Symington's top tips on lighting your home this autumn