Delicate gold leaf has elevated buildings, furniture, frames and other treasured objects for millennia. This opulent finish results from gilding; a complex process that taxes the craftsman and mesmerises the beholder. 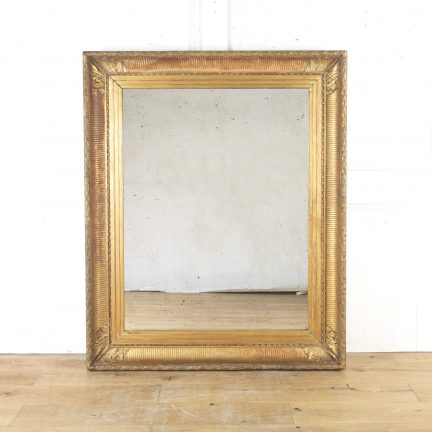 Gilding, in its simplest definition, involves applying gold leaf over the surface of an object to emulate gold. Gold leaf is gold, of course, albeit an extensively hammered and light form of the metal. But when the gilder expertly applies this delicate leaf over a whole carcass of wood or metal, it can emulate solid gold in colour and texture.

As with so many art forms, it was the ancient Egyptians who left behind the first evidence of gilding. For them, gold was the colour of the gods, and gold leaf was seen as a fitting adornment for icons and sarcophagi. It was also commonly used in the Far East and ancient Greece - later copied by the Romans, of course. Ever since, the shimmering grandeur of gilding has offered craftsmen the opportunity to elevate their design into something special.

Since the ancient world, the basic premise of applying gold leaf to the surface of an object has adapted and evolved in the face of new technologies. 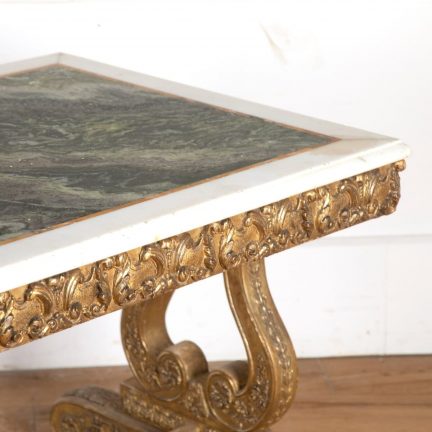 One of the most basic historical methods for achieving a gold effect is foil gilding. This relied on no chemical nor physical bond between the gold and the receiving surface. Gold foil is simply pressed to the surface of an object and held in place by inserting it into grooves, riveting, or burnishing.

The only difference between foil and leaf gilding is the thickness of the gold itself. Gold leaf is extremely thin and only developed alongside advances in gold purification. Only pure gold or gold-rich alloys, without certain impurities, can produce a suitably thin leaf through hammering. A sheet of gold leaf will never stay intact if you handle it with your bare hands. However, it is a paradoxical material; despite its fickleness, it is incredibly strong in a chemical sense. As a result, so long as you apply the leaf carefully and the receiving surface remains stable, the gold will neither tarnish nor deteriorate with time.

However, it is in the application that problems arise. Gold leaf cannot support its own weight and must be stuck to a surface with an adhesive of some sort. Historically, organic adhesives such as animal or vegetable-based glues have been used for this purpose. Whilst this method successfully embellished objects in antiquity and beyond, these adhesives naturally decay and cause losses to the gilding over time.

Two main gilding methods, oil and water, emerged over the years. Oil and water gilding account for most gilt antiques we encounter today.

In oil gilding, an oil-based glue adheres the fragile gold leaf to the surface. The glue then needs to dry and oxidise in a dust-free environment until it reaches the appropriate level of stickiness, at which point it is ready for the gold leaf. This method is the only option if the piece is going to weather the outdoor elements. Therefore, you commonly find oil gilding on external surfaces such as statues and architectural ornament. Oil gilding can provide a good matte covering of gold, but it will never have quite the same level of refined sheen as water gilding. 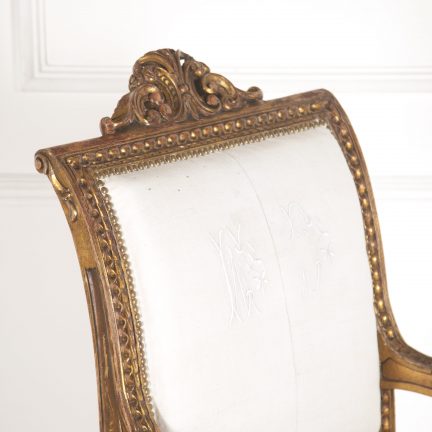 Water gilding is the more laborious of the two methods. As a result, craftsmen have usually reserved it for their finest furniture and decorative objects. The application of gold leaf requires any receiving surface to be completely clean and smooth. Before applying this delicate gold to wood or stone, a layer of gesso is laid down. Gesso is a type of plaster, usually combining a binder with chalk, gypsum and pigment. This layer is a key element in water gilding.

The gesso is layered on and smoothed to create an ideal receiving surface. At this point, the gilder can chip, carve and mould any decorative details into the object. The next step is applying yellow pigment all over to account for any nooks or crannies that might escape from the gold leaf. The gilder then paints and smooths a reddish clay mixture, bole, onto the surface. You might notice this red ground showing through gilding, which gives a piece beautiful texture and depth. Finally, water is brushed over the top and the gold leaf is applied. The surface is then burnished using an animal’s tooth or stone.

Gilt gesso first emerged in English design towards the end of the 17th Century. The furniture historian R.W. Symonds later said of the technique, 'it possessed a quality which no carving in wood could emulate.' Gilding has served as a mirror for royalty and nobility since the ancient world. It is fitting, then, that gilt furnishings first emerged in England at Hampton Court and Kensington Palace. Jean Pelletier, a Huguenot craftsman with royal patronage, spread the craft in England. Pelletier excelled at both gilding and carving in a time when they were usually the responsibility of different guilds.

Gilding continued to flourish in the 18th Century, and royal cabinet-maker James Moore took the craft to lavish heights. Moore was a master of the gilt gesso technique and he provided fine gilt furnishings for Kensington, St James's and Blenheim Palace. Gilding remained at a height of popularity throughout the Georgian and Regency periods. Gilt furniture was especially appealing because it emulated the ever-in-fashion opulent French style.

Gilding has never truly disappeared from design. Even in periods of more minimalist taste, a gilded accent here or there is an oft-revived tool for the craftsman. Whether the style of the moment was neoclassical or baroque, gilding provided a valuable resource. No wonder then, that the art persisted throughout the 19th and 20th Centuries. Indeed, it was perfect for that sense of luxury that characterised movements such as Art Deco and Hollywood Regency. 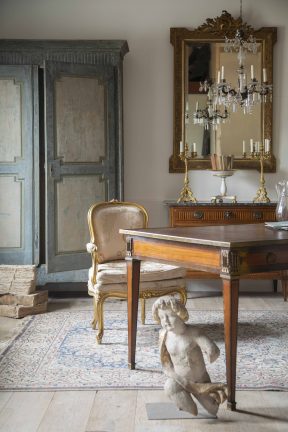 It is not hard to fathom why craftsmen have gone to such lengths to gild objects. Gold leaf has a bewitching reflective quality and gilt accents will complement one another spread throughout an interior. Gilding also makes a statement about the piece itself, giving a chair or console a sense of nobility and importance that draws the eye.

One of the most popular outlets for gilding throughout history has been mirror and picture frames. An ornately carved and gilded frame is a work of art in itself and elevates the status of the mirror or painting. Today, there is a high demand for anyone able to restore or recreate an antique gilded frame or object.

For all its fragility, gold leaf has a resilient permanence that only gets better with age. Restored or excellently preserved gilt furniture gleams with all its original grandeur, whilst other pieces have a more worn appearance that speaks to their history and age. Above all, gilded antiques reflect a complex craft that craftsmen all over the world have honed and practiced.

View some of our finest gilt antiques here.